‘springerin’ questions the concept of subpoenaed witness in western thought. Featuring an interview with philosopher Sibylle Schmidt on the worth of artistic testimony.

In springerin Suzana Milevska challenges the western concept of bearing witness. After reading a collection of essays on Roma judicial customs based on ‘testimonial “performances” that allow anybody present in court to be a witness’, she began questioning rigid, subpoenaed versions of testimony. ‘Trust in witnesses who haven’t been vetted and scrutinized by the legal system and institutions of law is counterintuitive and unimaginable to westerners,’ writes Milevska.

There are times when serious crimes, no matter how high-profile, deserve more audience. Milevska cites the trial of Slobodan Milošević, which limped through a protracted trial and ended without a verdict when the ex-Yugoslav president died in prison. Artist Ivan Grubanov obtained a visitor’s pass and attended the Criminal Tribunal in the Hague over the two-year trial, making drawings of the proceedings.

For victims of the war in Bosnia still waiting for an official apology from the Serbian government, Grubanov’s ‘anti-document’ serves as a ‘rare public reminder that Milošević’s trial even took place,’ writes Milevska. ‘Bearing the heavy weight of testimony, even when not directly being a witness, is one relevant role that artists have in contemporary troubled societies.’ 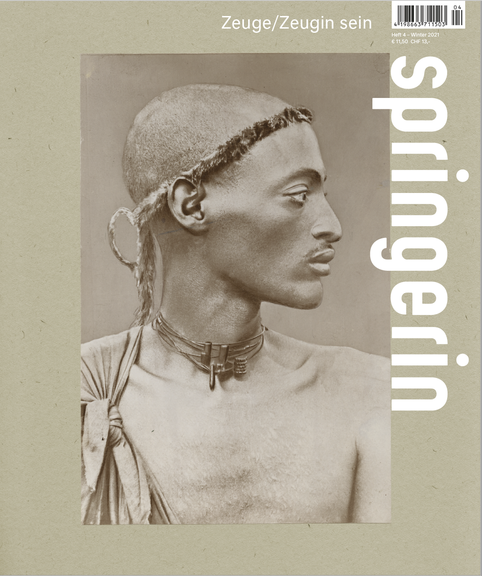 In an interview with Milena Dimitrova, philosopher Sibylle Schmidt speaks about her research on testimony within the arts. ‘Art and testimony are traditionally separated by a clear border,’ she says. ‘A witness should report the facts and, if possible, not embellish anything. The arts are not bound to historical truth. They can play with possibilities, with fiction.’ However, testimony, often based on a linguistic structure, as proposed by Derrida, is also open to embellishment, observes Schmidt.

In extreme circumstances such as the Holocaust, the Vietnam War and the Congo Wars, where testimony may initially go unheard or be deliberately ignored, the arts can provide another means of witness. ‘The arts have a special ability to reflect on the fragile nature of testimony,’ says Schmidt. Today’s artists ‘have taken on a role that in classical antiquity belonged to philosophers and poets: parrhesia, the courage to openly speak the truth, even if it’s risky for the witness.’ This quality would seem all the more valuable at a time when ‘it is difficult to awaken audiences from their lethargy, paralyzed as they are by the universal availability of information, hyped media testimonies and catastrophic news.’

Other interviewees include artists Uriel Orlow, whose work approaches colonialism and the history of racism through botany and the archive; and Uzbekistani Wjatscheslaw Achunow, who speaks about his autobiographical work produced within a Soviet context.

This year’s Venice Biennale proudly features a Roma Pavilion. But Roma people are still often underrepresented. Romania’s recent population census was an opportunity for minorities to acknowledge their identity, and yet discussion suggests that Roma may officially deny or hide their ethnicity, fearing repercussions. Activists describe why this happens and what is at stake.