Macron’s rhetoric on ‘Islamist separatism’ has inspired even more strident defences of laïcité on the right. Many see this hardening of attitudes as a final refutation of leftwing prevarications. But in reality, the debate on Islam in France remains confused at best.

The murder of the schoolteacher Samuel Paty in Conflans-Sainte-Honorine on 16 October was the sixth terrorist knife attack in France this year. It is the second such barbarous act, eight years on from Toulouse, to have involved a school. The dignity of the tributes to Samuel Paty did nothing to prevent a political and media frenzy taking place in the aftermath of the attack.

But what was responsible for the escalation, besides the legitimate emotion of the moment, party politics and the race to boost viewing figures?

Beyond the general anxiety caused by the combination of health, security and political crises, the debate around the proposed law on ‘Islamist separatism’ has had a major impact on the escalation. Some of the measures announced by the government or proposed by columnists on CNews, in the pages of Marianne, or on Twitter and Facebook, have been clearly targetted. They include extending the Pharos surveillance platform, closing the mosque that shared a video inciting hatred towards Paty, and dissolving the pro-Hamas Cheikh Yassine collective. But some of the more general proposals have most definitely been counterproductive. The fight against terrorism has nothing to do with whether supermarkets have halal shelves, whether mothers wear headscarves when accompanying children on school trips, or whether Arabic is taught in schools. 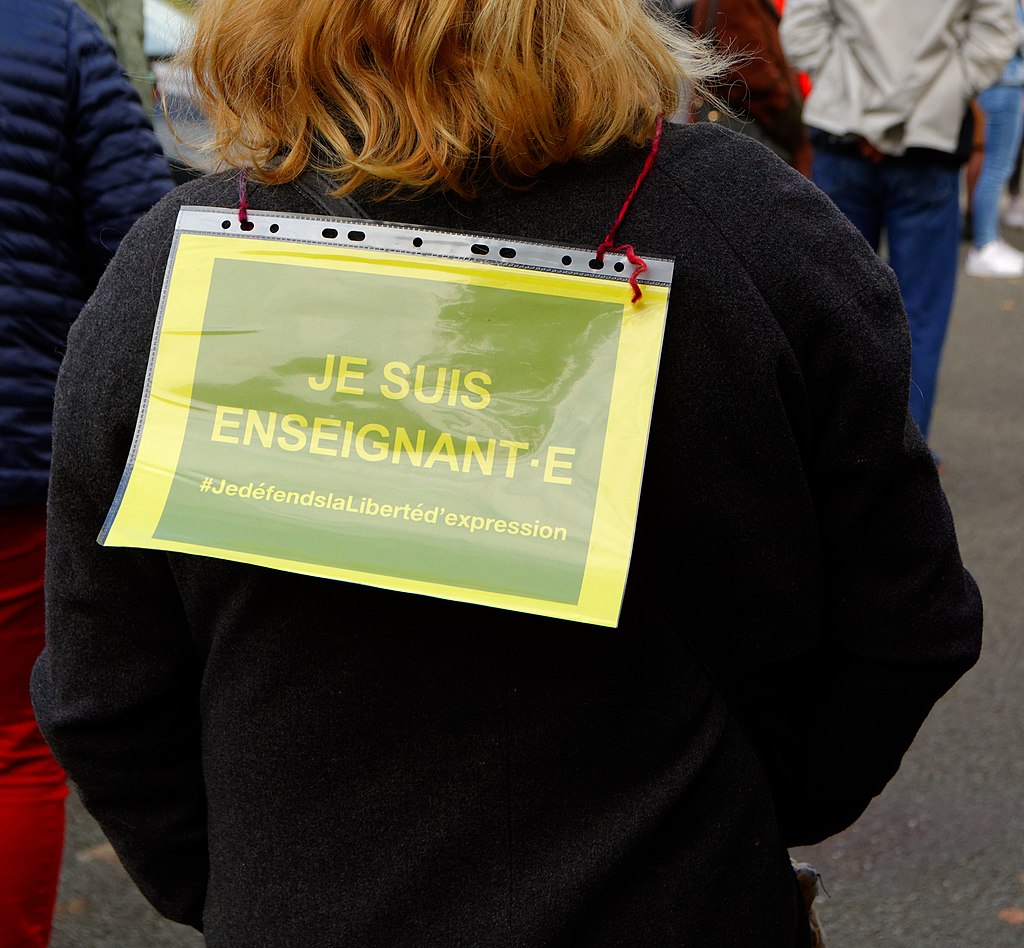 Photo by Thomas Bresson, CC BY 4.0 via Wikimedia Commons

The official response has been geared toward the restoration of a state authority shaken by a spate of urban violence. The tone was set by a raft of thundering statements by top politicians. ‘Fear is about to change sides,’ warned Macron. This prompted Bruno Retailleau, the leader of Les Républicains, to call for ‘weapons, not tears’ and Marine Le Pen of the Rassemblement national to declare that, ‘since terrorism is an act of war, it calls for wartime legislation’. Even Jean-Luc Mélenchon of La France Insoumise talked about ‘a problem with the Chechen community in France’, perhaps to make amends for his presence at a demonstration against ‘Islamophobia’ in 2019. The reticence of the Green party Europe Ecology, which it justified as a refusal to exploit the tragedy for political purposes, was widely interpreted as renewed proof of its weaknesses on the issue.

What some consider the end of an omertà in schools and contorted thinking among the intelligentsia has done nothing to clarify the debate. Alas, this ‘healthy realization’ at best confuses the issues around the question of Islam in France. At worst, it conflates a desire to ‘come together as a nation’ against immigrants and asylum seekers (equated with Abdoullakh Anzorov, the murderer of Paty, and the young Pakistani who carried out the attack outside the former offices of Charlie Hebdo) with the defence of a republican model at war with a communitarianism represented by Abdelhakim Sefrioui, leader of Cheikh Yassine collective.

The difficulty of addressing these disturbing events directly without being afraid to use words that are ‘too sensitive’ or ambiguous is certainly very real. But the true challenge is to add nuance and complexity to our analyses. Judging by the diatribes against ‘Islamo-leftism’, we are still a long way off.1

Commenting in this context is all the more problematic because social media heightens – occasionally for the better, but usually for the worse – anger and indignation.2 All angers are not equal, of course; some liberate and others murder. But the dilemma remains: how can we state our disagreements without fuelling the spiral of outrage, while also not resigning ourselves to silence and self-censorship?

One way is to put the events into the perspective of a longer, global history of violence. Cyrille Bret, for example, has analysed ‘the symbolic and operational mould of terrorism over the last decade’.3 Another way is through empirical studies. Florence Faucher and Gérôme Truc have demonstrated that ‘the dominant interpretation of the 2015 attacks in France did not exacerbate prejudice towards immigrants and Muslims, unlike in the United States post-9/11’.4 We can also attempt to grasp underlying developments and trends. Since the collapse of IS, a kind of ‘street-corner terrorism’ (Bret) has emerged, as converts of other nationalities replace the second-generation immigrants of North African origin that had made up the ranks of IS.5

The instrumentalization of ‘popular anger’ by the leaders of some Muslim countries, in particular Turkey, increases the risk. Although the investigation into Anzorov is ongoing, he appears to have acted at the intersection between a foreign Jihadist group (Hayat Tahrir al-Sham, which unlike Islamic State and Al-Qaeda pursues purely domestic objectives in Syria) and French Salafist movements. Will this remain a relatively atypical case, or will it herald a new generation of terrorists? It is difficult to say, especially because former IS fighters remain a threat. It would be mistaken to see the fall of the IS ‘caliphate’ as a definitive victory, without also being concerned about the aftermath in Syria and Iraq and the democratic aspirations of its people.

In France, too, terrorism can only be fought successfully through progress on the democratic front. Entrenching emergency legislation or stigmatizing entire groups will not help. It is fanciful to want to do away with ‘Islamic ghettos’ without dismantling the urban ghettos in which they proliferate.

The hysteria that followed the October 16 attack suggests that poor diagnoses will produce poor remedies. In order to truly combat terrorism, there needs to be a collective debate that does not just involve experts and columnists. The current trial of the suspects of the Charlie Hebdo attack is likely to provide neither the necessary analysis nor a national catharsis. Plans for a memorial museum for the victims of terrorism and the invention of new tools to complement and support next year’s trial on the attacks of 13 November 2015 could give us the opportunity to hold this collective debate. This time, we cannot afford to miss it.