Carl Henrik Fredriksson: At the end of last year, the social democrat Magdalena Andersson became Sweden’s first female prime minister. This was more or less exactly a century after women received the right to vote for the Swedish parliament, an anniversary that was celebrated as the birth of Swedish democracy. Sweden is regarded around the world as a model when it comes to gender equality and it even has a ‘feminist foreign policy’. So why has it taken so long for this Scandinavian paragon to get a woman at the top?

Lena Wängnerud: I have been asked this question many times over the past twenty years and it is in fact something of a puzzle.

First of all, despite there being eight parties in the Riksdagen, there are only two that can realistically appoint the prime minister. These are the Social Democratic Party and the Moderate Party, the conservatives. Those two parties have been very powerful for a long period. Research shows that when there is a lot of power concentrated to a few actors it is very difficult for women to move up.

There have been women in the past that have had a realistic chance of being elected as prime minister. I’m thinking in particular of Anna Lindh, who was foreign minister in a previous Social Democrat government. She was assassinated in 2003. So there have certainly been factors that none of the parties have any control over. But, in general, the Social Democratic Party and the Moderate Party have not taken the issue seriously enough. They have failed to ensure they have a large number of women to select from when the party leadership has been about to change.

So, power is part of the story – but also a bit of naivety. We tend to think of Sweden as much more gender equal than it in fact is.

CHF: Yet the Swedish parliament is the most equal in the European Union. Almost 50% of MPs are women, 49.6% to be exact. The average in the EU is 33%. In eastern Europe the numbers are much lower; in Hungary, for example, women make up only 13% of parliamentarians.

Why is it at all important to have women represented in parliament and in politics?

LW: Oh, it’s important for many reasons! A lot of research, including some of my own, shows that women and men tend to think differently – or at least partly differently – about politics and give priority to slightly different issues. Since the number of women in the Swedish parliament began to increase from the 1970s, female politicians have tended to prioritize issues that are especially important for female voters. These have to do with gender equality in a narrower sense. But they are also about how to handle the conflict between having a paid job and a family: the balancing that you need to do in everyday life.

Female politicians have been pushing for more generous parental leave legislation and for more public childcare, for instance, in order to make it possible to have both a career and a family. This is common across party lines. But we can also see that ideology comes into play here. It’s not the case that all women agree on all issues.

CHF: Is it essential to have a woman at the very top? Or is this ‘just’ symbolic?

LW: In a country such as Sweden, I think it’s more of a symbolic issue, mainly because we have such a high number of women both in government and in the parliament. This is the most important thing. In countries where this is not the case, having a female prime minister perhaps matters more.

But the symbolic reasons for actually having women in the top positions are still very important. It shows that it’s possible to break the glass ceiling. However, it’s the combination of having a woman as prime minister and at the other levels of politics as well. After all, without the support of other women, what is a female prime minister able to do? Not that much. 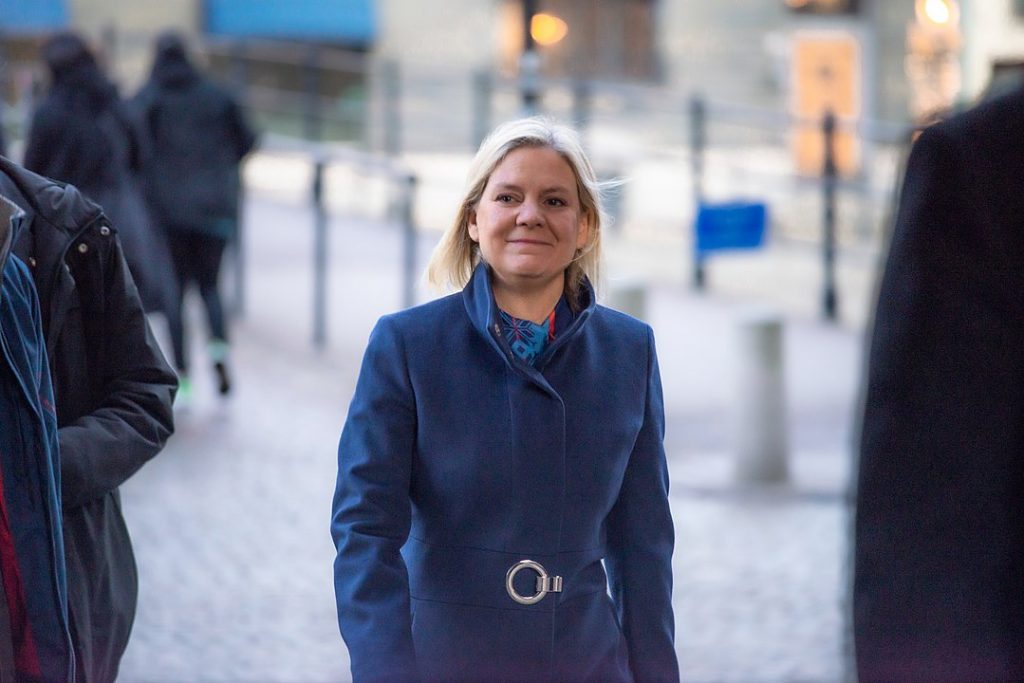 CHF: What has the reaction been to Magdalena Andersson becoming prime minister?

LW: When she was elected, representatives from many different parties were quite happy: at long last we had a woman also as prime minister! Frankly, it had started to get a bit embarrassing, especially in the international arena.

CHF: The debate before Andersson’s election was also quite remarkable. It wasn’t always clear that she would succeed Stefan Löfven, the former leader of the Social Democratic Party and prime minister. The fact that Andersson was a woman was of course heavily discussed and dominated the headlines. But being a woman was also described in terms of competence, rather than in symbolic terms.

LW: Well, it depends on what you mean by competence. A lot of research shows that women are more competent than men when it comes to figuring out the values or priorities of female voters – and in politics that’s a very important competence.

Magdalena Anderson is also considered very competent in general. She was minister of finance and is an economist by training. This means that she has a strong support within her own party, but is also respected across party lines.

CHF: But now she is governing in a very difficult parliamentary situation. Sweden will have general elections this autumn and the opinion polls show that the Social Democrats have gained support since Anderson took over. But she is governing on the budget of the opposition, and will have to do so until the elections.

This is very difficult to understand if you’re not familiar with the Swedish system. Please, give us some guidance. What does the Swedish parliamentary situation actually look like right now?

LW: Well, from a Swedish perspective it’s a bit of a mess! It’s not worse than what has been the case in many other European countries, but we currently have one of the weakest governments ever.

Since the Green Party left the governing coalition last autumn we have a single party Social Democratic government, whose base in the parliament is very, very weak. What prompted the split was that the parties that had formerly supported the Social Democrats and the Greens now chose to support their own budgets instead. This meant that the Social Democratic budget failed to get the required majority.

CHF: What are the prospects of that? The growth of the rightwing populist Sweden Democrats has messed up the old two-bloc system of Swedish politics in a way that makes it at least not improbable that shifting majorities and unstable constellations is something we will have to get used to. Or is that an over-interpretation of the current situation?

LW: No, it’s a very realistic interpretation. The parties really need to agree on how to handle the budget. Previously, the ruling parties were expected to govern with their own budget. What’s more, the opposition parties were expected to refrain from going into coalition and instead to support their own budgets. That resulted in in a situation in which the government proposal would win. In the last few years, the parties have broken this informal rule and now seem to do whatever they want.

There needs to be an agreement on how to handle the budget, because even if a government can still rule on the basis of shifting coalitions it makes it very difficult get any kind of long-term perspective on politics.

CHF: Does this require constitutional reform or is there an easier way?

LW: It can be done in the form of an informal agreement, as it was previously. However, the leaders of the different parties shift and the new ones don’t feel that attached to those old agreements. Informal agreements might therefore need to be formed at the beginning of each new parliamentary term.

CHF: Finally, what will be the main issues of the upcoming election campaign.

LW: I predict that it will be characterized by a multitude of different issues already being heavily debated. A lot has to do with the pandemic, of course, but also with security and foreign policy. Then there is the question of internal security, crime, and so on. These are considered typical male issues. But you also have the debate on the health system and other issues related to health care. Those kinds of issues are traditionally more female.

CHF: No matter what dominates the campaign, I’m sure that Sweden will continue to be a place to look at when it comes to gender equality and integrating women’s perspectives into mainstream politics. Thank you for giving us insight into the way Sweden works.

This conversation is part of a series of Debates on Europe, a joint project by S. Fischer Stiftung and Deutsche Akademie für Sprache und Dichtung: www.debates-on-europe.eu

‘Ord&Bild’ opens its pages to the Gothenburg-based writers collective Qalam, headed by Johannes Anyuru. Poetry, prose and discussion reflecting on what it means to write – and to write in Swedish.