French President Emmanuel Macron was greeted at a recent press event with a slap in the face. Damien T., the man who delivered the slap, was heard yelling ‘Montjoie! Saint-Denis!’ and ‘A bas la macronie’, the former being a royalist battle cry, the latter translating as ‘Down with Macronism!’

The reason for this assault? The supposed ‘decline’ of France at the hands of immigrants, a popular polemic among those on the far-right. The reason for the battle cry? Pride in France’s ‘white’ history, one that the far right believes is threatened by immigrants.

Only a few months earlier this same narrative of decline became a flashpoint in the small French city of Trappes. A local high school philosophy teacher, Dider Lemaire, spoke out on TV about his feeling that Trappes had become a ‘lost city’ due to the influx of Muslim immigrants. He falsely claimed that he had been placed under police protection after receiving death threats from Islamists, and identified himself as the inheritor of Samuel Paty – the teacher who was tragically beheaded last October for showing a cartoon depiction of the Prophet Muhammed in class. 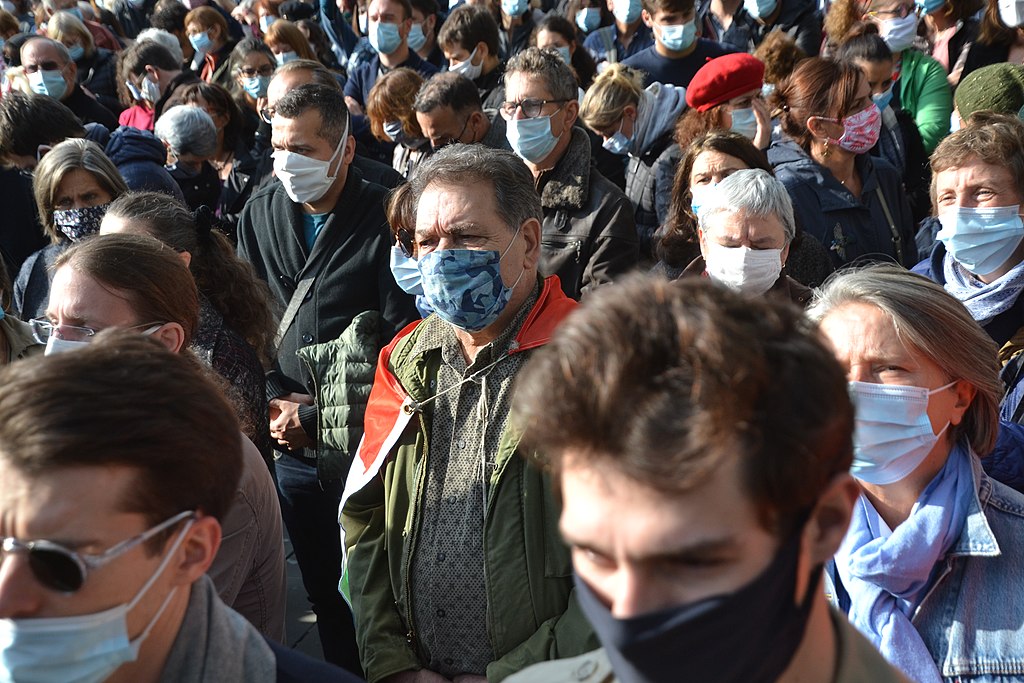 Rally in Paris after the murder of Samuel Paty. Photo by Jeanne Menjoulet from Wikimedia Commons.

Lemaire quickly became a hero of France’s far-right. Presidential hopeful Valérie Pécresse even went so far as to call him a ‘hussar’ of the Republic – a front-line soldier defending French values. Meanwhile, the town’s mayor, Ali Rabeh, actually did receive death threats for defending the reputation of his town against Lemaire’s attacks. But few treated him as a hero.

Lemaire’s military identity was metaphorical, but Damien T.’s wasn’t. An aficionado of historical European martial arts, Damien T. dresses in medieval armor regularly, and is the leader of a local club where that is normal. Damien even enjoys partaking in the occasional sword fight.

The bellicose, and almost overtly racial, nature of these two recent outbursts by followers of the far-right may offer important context for why nationalist Presidential candidate Marine Le Pen is distancing herself from the cruder aspects of nationalism and rebranding herself as a kinder, gentler right-winger. She is apparently trying to soften her image by spreading the news that she is a cat-lover, in contrast to her Doberman-owning, anti-Semitic father. She has also softened some of her policies, including abandoning her plans to do away with the Euro. Describing her campaign as ‘localist’, in contrast to Macron’s ‘globalist’ presidency, she leans heavily on the plight of rural (white) citizens as emblematic of France’s decline.

According to Le Pen, the National Rally party (formerly National Front – it too has been rebranded), which she leads, ‘has gone from being a protest movement to an opposition movement, and is now a government movement.’ Indeed, the more that Le Pen positions herself as a respectable candidate, the more those in power unwittingly affirm that by treating her as a real political threat.

And she is. While the Left has floundered, failing to put forth a united opposition to Le Pen’s virulent nationalism, the far-right has gained more and more ground, sweeping regional elections where they had previously failed to do so. Their campaigns are a powerful brew of fear and hatred, fomenting the mirage of national decline with a convenient scapegoat: immigrants from France’s former colonies.

Anti-immigrant sentiment is an old story in France, and the nation’s rural populace has become increasingly restless and resentful of late. Le Pen’s strategy demonstrates a keen awareness of France’s particular cultural and political vulnerabilities – an awareness that she no doubt gleaned from her father before summarily usurping him as the head of the party in 2015.

A political dynasty like that of the Le Pens offers a rare chance to follow the transformation of far-right rhetoric in the past fifty years. Yesterday’s anti-Semitism has become today’s Islamophobia (or if not become, at least joined forces with it).

Marine Le Pen’s softening of her most extreme policies is not a new tactic: it’s a version of her father’s policies under a new name. By citing Jean Marie Le Pen, Marine Le Pen ensures that her followers know what she means when she says, as she did at a recent event, ‘I will always be my father’s daughter.’ Followers who don’t fancy themselves as fascists and extremists can hide behind her euphemisms and elisions, leaving the extremes to the medieval swordsmen like Damien T. 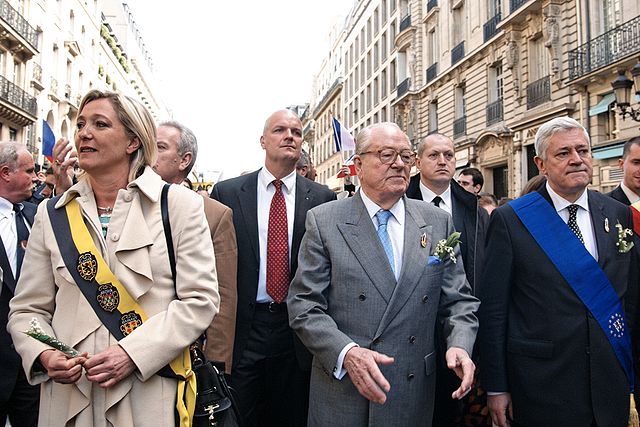 Though it may be tempting to draw parallels with the ascent of the far-right in the United States, the mess that France has gotten itself into is distinctive. Only in France could a public school teacher be unironically referred to as an infantry soldier – as a compliment! – even after proposing that young children should be forcibly removed from their parents for breaking the rules of French secularism by, for example, wearing a headscarf in school.

While those on the right blabber constantly about young people going off to Syria to become Islamist soldiers, what is equally true is that followers of Le Pen see themselves and others like them as soldiers for the Republic. And they are willing to resort to violence to maintain the hegemony of France’s white Catholic order.

This is because laïcité, a uniquely French political philosophy, has always been a battleground. Originally intended to wrest the fragile First Republic from the grip of the Catholic Church and its royalist sympathizers, French secularity has long relied for its survival on a dose of violence here and there. Within France, teachers and soldiers alike were tasked with instilling a Republican spirit where Catholic dogma reigned. And in France’s North African colonies, both teachers and soldiers were tasked with ‘civilizing’ those in Islam’s thrall, a purposefully unattainable end that was used to justify brutal and dehumanizing means. 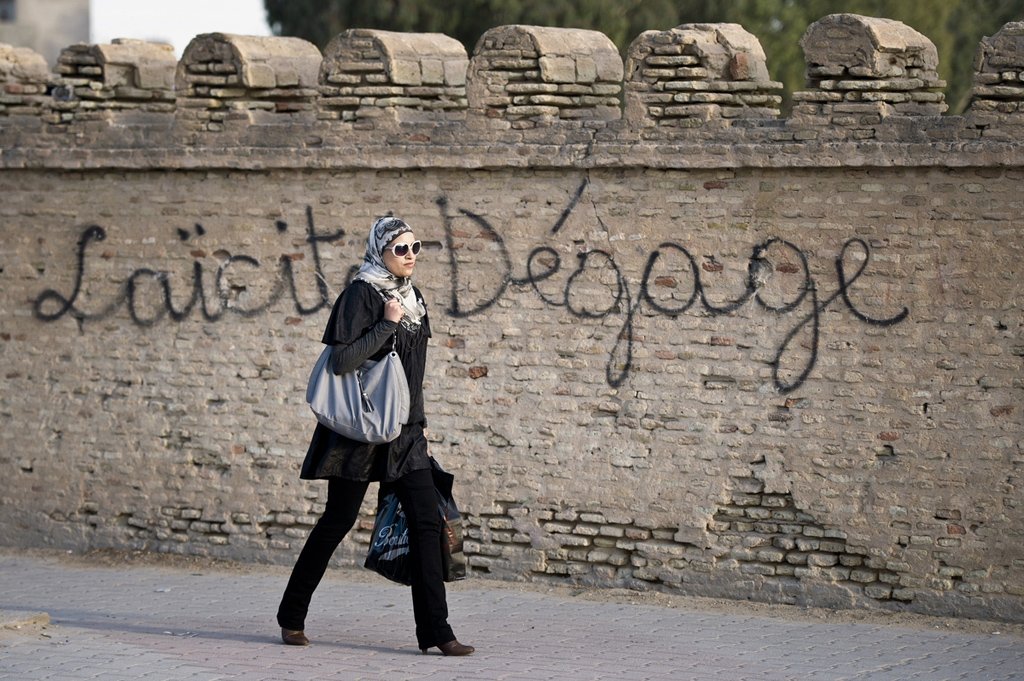 A tunisian woman walks by a graffiti against secularism in Kairouan, Tunisia. Photo by Ezequiel Scagnetti © European Union via Flickr.

On the one hand, Le Pen’s campaign might be understood as the return of the repressed, the Catholic culture and beliefs of the old days coming back to haunt the modern world: the virulently homophobic rhetoric of the Catholic movement Manif pour Tous is a good example.

On the other hand, it is clear that those on the right, people whose cultural Catholicism shapes their political views, do not fancy themselves enemies of the Republic, but rather, its defenders. Whiteness is a critical component of that defense, and they see this stance as a representation of France’s true past. One only needs to take a cursory look at France’s former colonies to understand. There, Frenchness – and loyalty to Republican values – came to be measured in whiteness, not piety. Citizenship had nothing to do with one’s adhesion to the Rights of Man, and everything to do with the color of one’s skin.

Yet, simultaneously, laïcité does not permit a public acknowledgment of Republicanism’s racial legacy. The civic ideal, championed by those on the left and right alike, is of a color-blind society.

This inability to speak about racism has allowed a person like Marine Le Pen to enjoy a meteoric rise. Her dog-whistle politics benefit from a popular belief that France doesn’t ‘do’ race – and even, in its worst iterations, that France’s brutal colonization efforts were well-intentioned. When Le Pen says ‘I will always be my father’s daughter,’ she is blowing that whistle, and people like Damien T. and Didier Lemaire are listening.

Marine Le Pen may or may not beat Macron in the presidential election next year, but either way, her impact on French politics is undeniable. If France is to get itself out of this mess, it will need a unified Left that raises the principle of racial justice to the level of laïcité. It will need to save French secularism from itself, proposing a new order that redeems what is good about France, and reckons with what is destructive.

If this is, indeed, a war, then the left better arm itself with a strong, unifying idea that will carry it to victory. If they don’t, they are in for quite a fight.

The veneration of the US constitution is directly connected to America’s emergence as global hegemon. As the US’s democratic dysfunctions become ever more apparent, this culture is coming under strain. Why the end of the American Century coincides with the collapse of the country’s constitutional consensus.