Index on Censorship explores the privacy impacts of contact tracing apps and other pandemic technologies: including articles on facial recognition and human rights; data protection and drone-use; and sexual privacy post-pandemic. 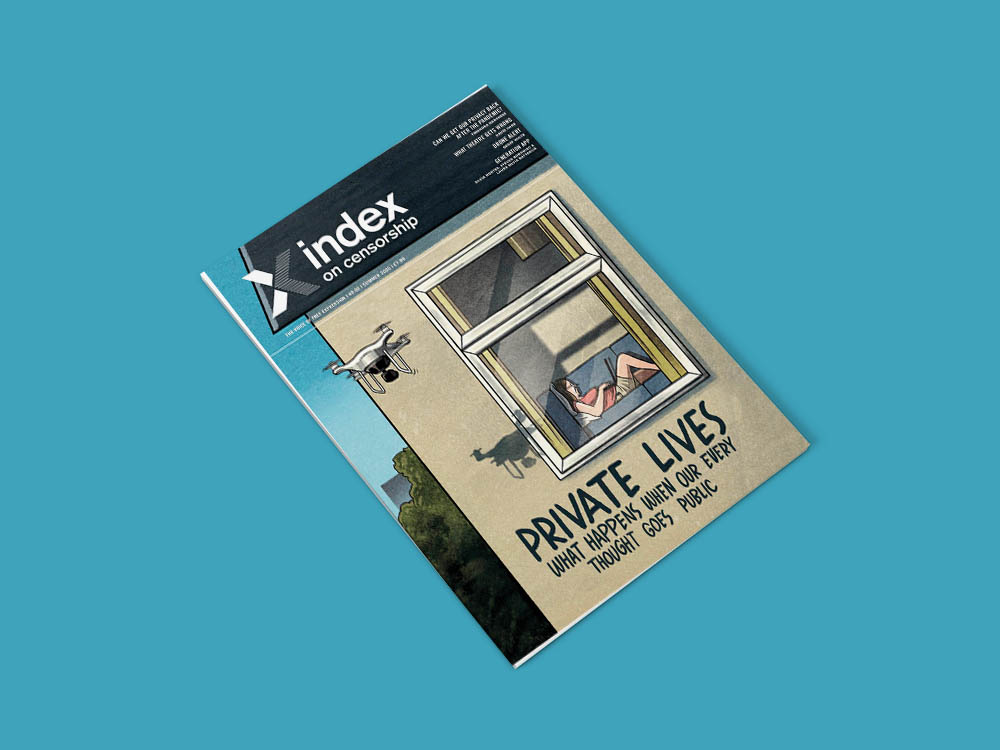 Government reticence about informing the public on the coronavirus outbreak signalled a lack of trust in society and helped the virus spread, writes Rachael Jolley in her editorial to the summer issue of Index on Censorship. ‘As we move to the tracking phase of the pandemic, we need to recognize that public trust is an essential part of any response.’

Yet governments across the world are ramping up surveillance and cracking down on privacy. Contact-tracing apps may be used for more than gathering health data, drones increasingly invade private space, and facial recognition technologies continue to proliferate. ‘Those who fear their privacy is under threat are unlikely to feel confident in a society that takes away basic freedoms during times of crisis.’

Contact-tracing apps can be effective in containing the pandemic, but they can also have unintended consequences, warns tech writer Timandra Harkness. For example, the publicization of outbreaks in South Korean nightclubs led to the stigmatization of the gay community. Measures taken during the emergency might also serve other purposes once it’s over. Contact data may be of use to the police and local government, not to mention advertisers. ‘In exceptional times we might accept measures that would normally be draconian, but they must remain exceptional, not become the new normal.’

Contact-tracing, legitimized by COVID-19 security risks, is already a dating app reality. The privacy of LGBTQ communities is particularly open to abuse. Jemimah Steinfeld calls for better protection of sexual identities, citing a new Index on Censorship global report. ‘Gay apps are especially important for those who live in countries where being outwardly gay is difficult. Indeed, in certain countries, these apps can be a lifeline … Protecting people’s sexual identities will continue to pose a challenge, but it is an issue that is important to try and fix now more than ever before.’

The use of facial recognition tech is on the increase as governments seek to monitor the spread of the virus. But its effectiveness – often not scrutinized enough – needs to be weighed against the risks it poses to human rights, writes lawyer Richard Wingfield. The technology developed by US company Clearview AI, for example, ‘works by scraping millions of social media pages and websites for images and videos of unsuspecting individuals’ and is sold to both the public and the private sectors. And yet the debate on facial recognition technology tends to treat privacy as something that does not apply beyond one’s four walls.

Loudspeaker-equipped drones issuing safety warnings during the pandemic have been deployed in a number of countries. However, debate over how data protection law should apply is playing catch-up, writes journalist Geoff White. In the UK, drone use has surged since 2014, with police forces at the fore. China’s dominance in the drone industry is also a matter of concern: DJI (Da-Jiang Innovations) supplies around 60 per cent of the world’s drones. ‘As countries move to lift lockdown restrictions, could drones be combined with facial recognition to track individuals?’