Hakan Sarkdemir cites the lack of a professional distribution network as the biggest problem for Turkish journals. That said, being visible and selling well; selling well and being read well; being read well and having many readers: social media aside, these are not the same thing.

Roughly speaking, what percentage of your budget currently comes from sales and what percentage from and advertising? How do you deal with economic difficulties? Are you widening your field of activities beyond strictly publishing? Are you exploring new business models, lobbying cultural decision-makers, or appealing to the public?

All of our budget comes from sales because ad revenue is not a source of income. We have taken very few ads so far. The problem in Turkey is the lack of a “market” for poetry. In a country of 70 million, poetry books are printed in five hundred copies and cannot sell out in years. The problem is inside. The best selling journal sells no more than 1000 or 1500 copies. In relation to the population, this is dismal.

While journals in Europe continue their existence largely with the help of public support, this is not the case in Turkey. What should be done in Turkey to secure public support for art and literature journals?

We don’t want public support; we want readers. The government could make bulk purchases of journals for libraries, and this is enough. What we need is reader support.

What is your distribution and sales strategy? How do you take your journal to its readers?

Distribution is a nightmare for many journals in Turkey. Like so many others, we don’t have a professional distribution network. This would be the single most important issue to resolve for journals. We distribute through our own means. We have volunteer representatives in many cities who distribute the journal to bookstores. Still, we have no presence in many cities. Whatever we may do, we will never be able to cover all of Turkey.

Journals tend to extend their publication intervals due to economic difficulties. How does this impact a journal’s communication with its readers?

An extension of the period does have a negative effect. But the literary reader is loyal. May be it’s because they are so few; a reader of literary journals won’t give up easily.

Do you have a website? How much of your content do you make accessible on it and what other uses does it serve? How do you make use of social media and what do you perceive to be its benefits?

We have a website: www.karagozedebiyat.com. We publish the contents on this site, but we don’t make the entire content or past issues available. The site is designed more to give the journal an online presence and allow readers to contact us. We use social media for announcements; we don’t prefer to use instant messaging to communicate with our readers. We don’t need to be in close contact with them all the time; Karagöz is a periodical, but it does not have to be read or spoken about all the time. We are not writers who depend on creating sensations in social media to sell books or magazines. When “content” leaps beyond a connection where the message is condensed to 140 characters or less, to a context which requires more attentiveness and effort, a distinction between follower and reader occurs. Mass media begins to occupy as much space on social media as it does on TV, and this makes social media less valuable to us. In this respect, we cannot build a definite opinion on the function of social media. 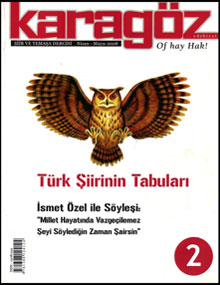 Are you experiencing opportunities for synergy or co-operation between big and small media, or print and digital media, that previously did not exist?

This relationship is becoming more and more symbiotic, meaning that both small and big media are becoming slaves to the same mundane content. If everyone has the same agenda, there will be no alternative channel for information. When a famous writer makes headlines in big media, the small media feel compelled to discuss the same writer. All publications turn literary issues into celebrity events, as if every writer demanded to appear as a “celebrity”. It is troubling how writers and poets are being distanced from us by raising the threshold of being introduced to them.

Like other types of cultural organization reliant on public funds, cultural journals throughout Europe have felt the impact of recession. In addition to funding cuts, journals are also having to negotiate the upheavals taking place in the print sector.

Through a European survey of financing for cultural journals, Eurozine takes stock of the situation of the network, in order to communicate its experiences internally and to others who hold a stake in European cultural policy today. [more]

We don’t know whether the issue of changing reader preferences has to do with more choice for the reader or with fewer places the reader is pushed into to make a choice. We are not publishing a journal for more readers or more circulation. That wouldn’t be bad, but we live in an age when even the reader can be manufactured. There are powers that can tell a potential reader what to read. A publishing house could aim to maximize its profit and sales, but this cannot be our objective. Being visible and selling well; selling well and being read well; being read well and having many readers are not the same thing. This is an illusion created by social media. We are glad to see people make a living by writing, but the way to do this is not conceding excessively to readers’ demands. We believe that the writings submitted to the journal could be influenced by “reading” and “writing” conventions set forth by the journal and the editorial function lends this power to every journal. You have the right and opportunity to select poems and writings submitted to you. Journals are mediums that could transform some of their readers into writers if they make an effort in this direction. Our generation aimed at this and succeeded most of the time. But it is true that we are missing out on digital media, where there are more readers spending more time. In this respect, we may be about to lose the opportunity in our hands.

We don’t think there should be an artificial, manipulated competition among journals. Any type of literary competition has to be based on the work. The quarrel between journals, poets and writers are usually personal in nature, having nothing to do with literature, and not of any concern to the readership. The platform for literary and political competition should be the work of literature. Bickering between journals or people will not bring anything useful. To the contrary, cooperation would carry us forward. We can demonstrate that we have great literature and poetry by putting it on without any reservation. Contemporary American poetry has initiatives like ubu or Poetry Project that brings together figures who would seem to be entirely incompatible in terms of politics or literature. St. Mark’s can gather all poets under its umbrella. Why don’t we have initiatives like this?

Talent and effort matter more; being a writer’s protégé or having works printed in a nifty magazine doesn’t make people writers. This kind of situation can only be considered valuable if it directly conveys a certain experience to the person in question. If the person is truly a poet, he will choose his own journal, master, and friends among peers. If need be, he can even choose to publish his own journal. We should take the internet media as seriously as we take medium of literature. It may be a nest of gossip today, but there are worthwhile things going on as well. If you have ignored poetikhars, you have missed a trend in our contemporary poetry. If a writer refers to this website in his work, he wouldn’t be scoffed at; instead, he would be taken more seriously. As for fame, we have always been wary of fame not based on one’s work.

What responsibility does the bias and cultural inadequacy of mainstream media (daily newspapers and others) bring on journals? Are journals able to stand up to the task? What responsibilities do readers expect journals to undertake?

If you check culture and arts pages or book supplements of newspapers to understand where literature, poetry in particular, is headed, you would be misled. Popular media is decades behind, like academia and curricula. If you were to look at current poetry and literature from the vantage point of literary journals instead of getting lost among a myriad of works, you would be confused. Still, a confused mind is better than an empty one. Newspapers have historically been instrumental in popularizing the ruling discourse, and guaranteeing the communication of the political power with the masses; while the journals have been told to play the role of “the stronghold of free thought”. But no one has worried about what it means to actually think. A journal cannot think on behalf of its readers, but it may teach the reader to think alongside. A journal could pave the way to aesthetic and philosophical thought, and should be expected to at least lead in this respect.

Istanbul’s water reserves are drying up: increasingly severe droughts, intense urban development and the growing population all have their impact. With no miracle cure in sight, environmental science looks for proven ways to reduce water loss in times of scarcity.