UEFA’s recent condemnation of the racist fans of Steaua Bucharest was the most powerful statement ever issued by a European institution against anti-Gypsyism and had a positive echo in the Romanian press. So why do EU bodies fail to take a similar stance?

On 24 September this year, over 30,000 people in the Romanian National Arena, joined by millions more on TV, watched the football match between Steaua and Rapid Bucharest. During the game, over 20,000 people repeatedly chanted, “We have always hated and will always hate the Gypsies.” Calls of “die Gypsies” could also be heard throughout the game.

Before the game, the owner of Steaua, Gigi Becali, a member of the European Parliament, had stated that he was not afraid the other team would win since it was a well-known fact that “they drown just before reaching the shore”.

The phrase derives from a punishment visited on Roma/Gypsies during the many hundreds of years Roma were slaves of the Romanian aristocrats and the Romanian Orthodox Church. Roma were covered in tar, rolled in feathers and then thrown into a river. Romanian aristocrats would watch them drown while trying to reach the shore. It may also relate to incidents during the Holocaust when Romanian officers shot at boats transporting Roma over the river to Transnistria – many Roma drowned before reaching the shore. Many more died of starvation. 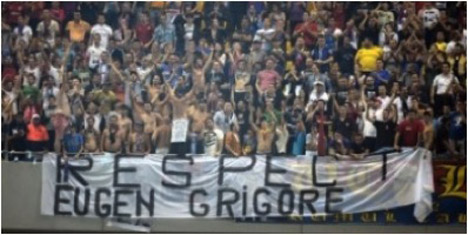 The justification for the lack of official response to these racist chants in past years is that the fans of Rapid are nicknamed “the Gypsies”.

However, on this occasion, among the racist banners displayed was one with the text “Respect Eugen Grigore”. Grigore was a mass murderer who killed 24 Roma in 1970. In addition, during and at the end of the game, Steaua officials incited the fans to racism and even joined them in their chants.

Throughout September, a number of incidents across Europe demonstrated yet again the appalling levels of anti-Gypsyism prevalent within the European Union. The Policy Centre for Roma and Minorities in Bucharest reported the Romanian incident to the European Commission, the Council of Europe, the Fundamental Rights Agency, the OSCE and all intergovernmental bodies that have significant budgets dedicated to addressing Roma issues. We have reported similar or worst incidents in the past.

We also reported it to UEFA, the governing body of European football, and to the Romanian Football Federation (RFF), where we talked to people at the highest level. As soon as they received our report they called us to discuss the next steps. Two days later, the President of the RFF condemned anti-Roma racism in Romanian football in the strongest declaration of its kind ever issued by an influential institution in Romania. It was followed by a letter to the RFF from UEFA President Michele Platini expressing disgust at anti-Gypsyism in Romanian football, a move equally unprecedented at the European level. This was sent on 4 October before a European League game in which Steaua Bucharest were playing, and re-posted the next day on the RFF website – a clear, blunt statement that the RFF is serious about eliminating racism in football stadiums. It was the main subject of debate in the Romanian media the following day and resulted in hours of prime-time discussion on the subject.

According to EU intergovernmental organizations, the elimination of anti-Gypsyism is a priority; all complain about the lack of political will at the level of EU member states. If this is so, an open letter similar to that sent by Platini asking the Romanian Prime Minister to take an unequivocal public stand against such incidents would seem an obvious step on their part. As Platini’s letter shows, such statements have the potential to produce a major impact on Romanian society and cost virtually nothing. The millions of euros spent on irrelevant meetings and research at the European level could have been vindicated by a simple letter. The Romanian media is clearly positive about the need to eliminate racist behaviour in the stadiums and the Prime Minister had nothing to lose; such a statement might even have increased his popularity.

The European Commissioner responsible for Roma issues is also responsible for anti-discrimination and justice; the director in charge of anti-discrimination received our report. The Council of Europe has a high representative on Roma issues and the OSCE a senior advisor for Roma and Sinti. The Fundamental Rights Agency spends vast sums on Roma reports and visits to countries to talk about Roma issues.
Why did none of these institutions respond to the Steaua Bucharest incident and arguably miss one of the best opportunities they have ever had to push the Romanian political leadership into making a public statement against anti-Roma racism?

Bureaucratic and political careers in all these institutions are not helped by courageous moves targeting change or reform. Diplomacy is often mistaken for cowardice and the institutional logic within such bodies promotes subservience and a culture of zero criticism of the leadership. Critical voices from within and outside are easily subdued. Roma issues are complex and Europe needs to make significant financial and political efforts if it is to solve them; not a popular move nowadays.

The Israeli philosopher Avishai Margalit, in his argument for a Decent Society as opposed to the Just Society proposed by John Rawls, emphasized humiliation as a significant problem of state institutions when it comes to its vulnerable groups. The reaction of intergovernmental institutions compared with the reaction of UEFA means one of two things: either all these institutions are prime examples of humiliating institutions, or else they struggle with cowardice and incompetence. In either case reform is necessary.

Race to Rio still on for Ukraine's Paralympians

A form of play

Or, the devotion of the tennis fan

British imperialists may have invented the modern idea of organized sport, associating valour on the field with virtues such as ‘fair play’, being a ‘good loser’ and, above all, nationalism. But, writes Elizabeth Wilson, the devotion of the tennis fan is of an altogether different quality.