Dwutygodnik touches on a contemporary taboo: why hatred and other base emotions are no less valid than cool impartiality; how hating Russia doesn’t help; and why there’s hope in hate if we can channel it into change.

Hatred is everywhere in the canonical works of western culture. Why, then, do we relegate it to the sphere of melodramatic pop and senseless internet bickering? ‘Responsible, rational, autonomous persons like you and I,’ writes Agata Sikora in Dwutygodnik, ‘don’t feel hatred – at best, we examine it in erudite essays’.

In his 1939 work Über den Prozeß der Zivilisation (The Civilizing Process), Norbert Elias argued that the ideals of civility and self-control were the by-products of the centralisation of state power and the rise of the idea of a rational homo oeconomicus. As Elias noted later, the civilizing process finally broke down into rationalized genocide. 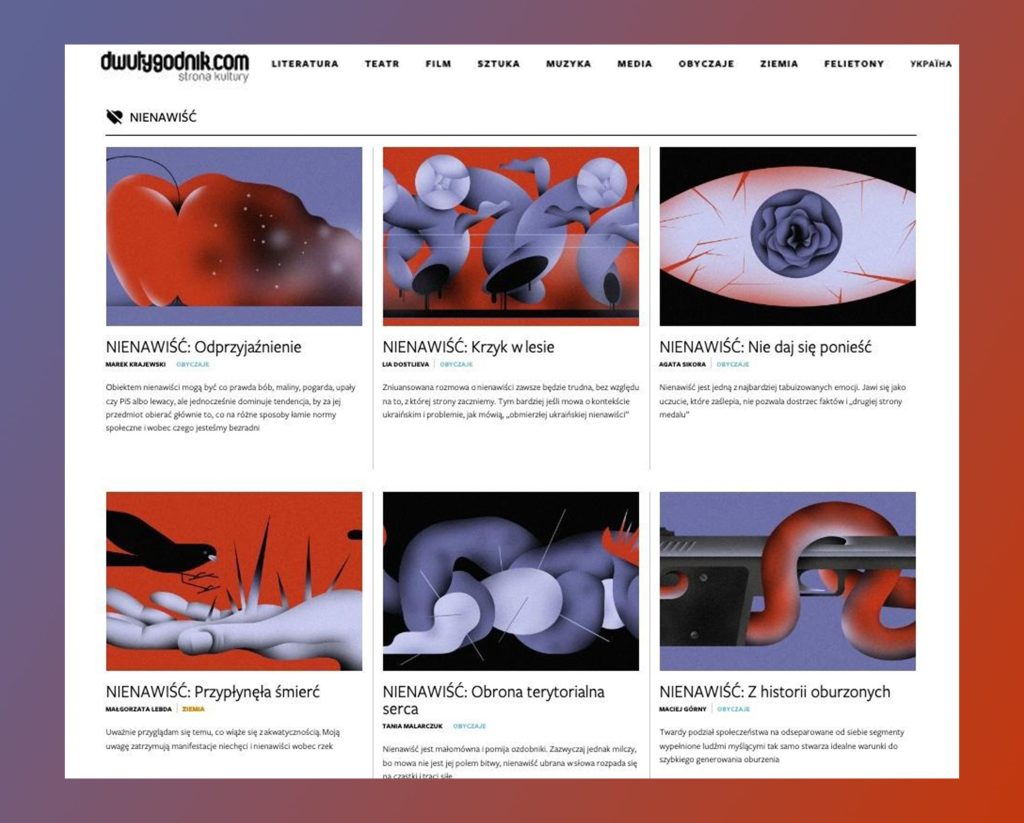 Despite being too linear and Eurocentric, the scheme offers a useful perspective, according to Sikora. Contrary to pop psychology, hate is not just an individual problem and responsibility, but the product of social tensions and the distribution of power. #MeToo, anti-mobbing campaigns and other movements against abuse have made clear that restraint is tied to one’s position in the social hierarchy.

The necessity to constantly police ourselves awakens a yearning to let go, which characterises both the modern obsession with authenticity and self-expression, and the pull of older ideas like romantic love or nationalistic hate. After Russia’s full-scale invasion of Ukraine, even liberal elites have proven to be not wholly immune.

But hatred, it seems, is very often an expression of powerlessness. Sikora finds herself agreeing with anthropologist Renato Rosaldo that claims of ‘objectivity’, ‘neutrality’ and ‘impartiality’ are signs of privilege and authority. They should not be seen, however, as more right or true than the perspective of those touched by anger, grief and hate.

Ukrainian writer Tania Malarczuk finds dark and violent impulses awakening within herself after the escalation of Russia’s war against her homeland. ‘Before the 24 February 2022 I didn’t know hate,’ she writes. ‘I screamed, I raged, I had fits, I stomped my feet, I cursed as colourfully as a qualified philologist can, . . . I felt angry and vexed, but I didn’t have the slightest idea about hatred.’ She describes this destructive mix of aggression and paralysis as an invading force bent on occupying her heart. And like Ukraine itself, she does not wish to surrender.

Malarczuk makes sure to distinguish between hatred and righteous anger. There is nobility in fighting back, but moments of powerlessness awaken hate. For those unable to join the fight, the only hope is to find an antidote, to learn to love and to believe that good will triumph. At least that is the answer found by Malarczuk while looking after the eight-year-old daughter of a friend visiting her wounded husband. In conversation with the girl, who ‘seems already too big for lies but still too little for the truth,’ Malarczuk finds a hopeful and loving way to talk about the horrors of the war through the medium of fairy tale.

Love and hate return in sociologist Marek Krajewski’s exploration of the idea of ‘unfriendshipping’, a term coined by Harvard historian Daniel Lord Smail. It describes how people feel deep hostility and hatred towards those with whom they used to or should share a strong bond, when that bond becomes strained and unwanted but at the same time impossible to break. ‘We hate our neighbour,’ writes Krajewski, ‘because we cannot move elsewhere and because he should be close, but instead he breaks the principles of community life and disregards us. We hate compatriots who espouse criminal ideologies, because they belong to our community and we know that they will neither change nor disappear.’

Just as there are many different forms of closeness and intimacy, so there are many variations of hatred. Unable to imagine this multitude, Krajewski conducted an online poll. Two thirds of respondents defined the objects of their hatred. These ranged from public figures and individual wrongdoers, through broader characteristics of people or states, to elements of everyday life.

The biggest group of answers pertained to attitudes and behaviours that somehow broke the social contract: dishonesty, disrespect and all forms of violence. Here Krajewski sees a ray of hope: ‘maybe the (oft criticised) spread of hate is a positive phenomenon, because it means we’ve become sensitive to various asymmetries in social relations, we speak more openly about our lack of acceptance for violence, prejudice and disregard for others’.

Unpleasant as it may be, perhaps it’s possible to build a more just, less violent social order, if only we can overcome our urge to scapegoat others and seek systemic change instead.