Were the riots in the UK a political upheaval of the poor? No, says Kenan Malik, the riots were not protests in any way. Instead they revealed that a second kind of poverty stalks Britain: moral poverty. The UK has become a nation of isolated individuals.

So, what are we to make of the chaos and disorder that swept through London and other British cities like scenes from a J. G. Ballard novel? For some, the violence and mayhem brought back memories of the riots that tore apart Britain’s inner cities in the late seventies and eighties. There is, in fact, no comparison. In the 1980s, British cities exploded in response to mass unemployment, entrenched racism and, in particular, oppressive policing. The rioters were part of no organized political movement but they had a sense that they were taking collective action against racist police. They were driven by a burning sense of social injustice and a desire for social change.

Last week’s riots were different. There was no sense among the rioters of being part of a collective, no desire to transform society, just an inchoate, nihilistic desire to cause mayhem and to profit from the looting. The riots were not “protests” in any way, but a mixture of incoherent rage, gang thuggery and teenage mayhem. 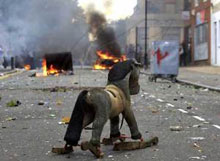 There was certainly looting in the 1980s riots but such looting was incidental to the confrontation with the police and the authorities. In August 2011, smashing up stuff, and stealing it, was what defined the mayhem. In the 1980s, people living in Brixton, Tottenham, Handsworth and Toxteth, in the very places wrecked by the disorders, nevertheless supported the rioters. They recognized that the violence and the destruction were not ends in themselves but part of a necessary challenge to an oppressive system. Today, the fiercest opposition to the rioters comes from those who live in the areas they have trashed. There is real rage in these areas against the orgy of destruction.

Many on the Left, while condemning the riots, argue that they are nevertheless protests against poverty and social exclusion. “Many of the people involved,” the criminologist professor John Pitts suggested, “are likely to have been from low-income, high-unemployment estates, and many, if not most, do not have much of a legitimate future.” Many, such as former London mayor Ken Livingstone, have blamed the riots on the public expenditure cuts introduced by the current Coalition government.

There is little doubt that poverty and joblessness scar large areas of Britain and that the vicious public spending cuts will vastly exacerbate the problem. Tottenham, for instance, where the first riots broke out, is among London’s poorest boroughs, with 54 applicants chasing every registered job vacancy. Britain is less equal, in wages, wealth and life chances, than at any time for a century. A map of the London riots matches almost exactly the map of the most deprived areas in London.

And yet, it is difficult to view the rioters simply as members of an “underclass”. Among the first looters who appeared in the courts this week were a graphic designer, a social worker, a teaching assistant, an estate agent, a forklift operator, a lifeguard, a chef, a postman, and a hairdresser. How representative these are of the rioters as a whole remains to be seen. The picture emerging, however, is of riots in which it was not just the jobless and the poverty stricken who were causing mayhem.

What the riots revealed was that a second kind of poverty stalks Britain; that as well as economic poverty there exists moral poverty. Television pictures of a group of youths pretending to help a young man injured in the riots while casually, and callously, robbing him were flashed across the world this week, pictures that seemed to express the moral deficit of the rioters. It is striking how little they seemed to care for their own communities and how self-destructive their actions appeared to be. Here was a generation disengaged from both their communities and from the political process, with no focus for their anger and resentment, and with no reason to feel responsible for the consequences of their actions.

Politicians have been quick to pick up on the idea of a moral deficit. The riots, David Cameron told Parliament, revealed a “deep moral failure” in British society. It was an argument echoed by many others, on both sides of the House, in the parliamentary debate about the violence. These, however, are the very politicians who have helped create the moral deficit through their social and economic policies and are now looking to blame everyone but themselves for the consequences. In that sense they are as self-regarding and nihilistic as the rioters themselves.

The relentless promotion of the market ideology over the past three decades has helped fragment society, tearing apart social bonds and creating a nation of isolated individuals. In working class communities the authority of institutions, from families to trade unions, that once socialized young people and inculcated moral values have been broken. At the same time, the introduction of the market ethos into every area of life from education to health to the arts has helped institute an instrumental ethic in which all that has come to matter is value for money and in which wider social needs and moral issues have been ignored.

Having broken communities and eroded social bonds through the unremitting promotion of the market, politicians responded both by, ironically, expanding the state and by blaming the poor. Where once families, and communities and collective institutions helped define right and wrong, increasingly the state has stepped in to impose such social norms, through everything from citizenship classes for children to parenting courses for adults. As a result, morality has come to be seen not as difficult choices one has to wrestle with, or norms one works through within a collective setting, but as a set of predetermined rules provided as a state hand-out. Morality has ceased to be ours.

At the same time, politicians have increasingly taken to blaming the poor themselves, rather than their social and economic policies, for the breakdown of family life, a lack of social values, a selfish disregard for the needs of others, and a rampant consumerism. The same values that many tolerate among bankers are condemned in the unemployed and the poor. And with condemnation has come repression, from increased CCTV surveillance to punitive workfare rules.

Because the Right has appropriated the arguments about moral failure, many on the Left have rejected moral arguments altogether. The Left talks much about the social and economic impact of neo-liberal policies. But little about its moral impact. Such willful blindness is dangerous. Morality is as important to the Left as it is to the right, though for different reasons. There can be no possibility of a political or economic vision of a different society without a moral vision too. Moral arguments lie at the heart of our understanding of social solidarity, and of the distinction between notions of social solidarity and pious rightwing claims of “we’re all in it together”. And that is why it also has to be at the heart of our understanding of the riots. The questions about economic and social poverty, about unemployment and the cuts, are closely related to the questions about moral poverty, about the breakdown of social solidarity and the rise of a nihilistic culture. There can be no challenge to mass unemployment and imposition of austerity without restoration of bonds of social solidarity. We cannot, in other words, challenge economic poverty if we do not also challenge moral poverty.

Ironically, perhaps, the way forward was shown by those who stood up to the rioters. In many communities, local people patrolled the streets and protected buildings. They did so largely because the police were unable or unwilling to help. In one sense, such community action helps camouflage the government’s public expenditure cuts, help making up for the services the state should be providing. But, in another sense, such action is much more than an ersatz form of Cameron’s Big Society. In taking matters into their own hands, and in accepting responsibility for their own communities, those who stood up to the rioters were taking the first steps towards restoring the moral deficit by recreating the bonds of social solidarity.

The fire this time

Transnational feminist politics and the erotics of resistance

Some musicians choose not to perform in support of others. Others do so to highlight their own plight. But their silence needs an audience: ‘For disruption to work, there must be witnesses with thwarted expectations.’