Having condemned hyper-sexualized culture, the American religious Right is now wildly pro-sex, as long as it is marital sex. By replacing the language of morality with the secular notion of self-esteem, repression has found its way back onto school curricula – to the detriment of girls and women in particular. “We are living through an assault on female sexual independence”, writes Dagmar Herzog.

“Waves of pleasure flow over me; it feels like sliding down a mountain waterfall,” rhapsodises one delighted woman. Another recalls: “It’s like having a million tiny pleasure balloons explode inside of me all at once.”

Choose almost any sex-related issue. From pornography and sex education to reproductive rights and treatment for sexually transmitted diseases, Americans have allowed a conservative religious movement not only to dictate the terms of conversation but also to change the nation’s laws and public health policies. And meanwhile American liberals have remained defensive and tongue-tied.

So how did the Religious Right – that avid and vocal movement of politicised conservative evangelical Protestants (joined together also with a growing number of conservative Catholics) – manage so effectively to harness what has traditionally been the province of the permissive left?

Quite simply, it has changed tactics and is now going out of its way to assert, loudly and enthusiastically, that, in contrast to what is generally believed, it is far from being sexually uptight. On the contrary, it is wildly pro-sex, provided it’s marital sex. Evangelical conservatives in particular have begun not only to rail against the evils of sexual misery within marriage (and the way far too many wives feel like not much more than sperm depots for insensitive, emotionally absent husbands), but also, in the most graphically detailed, explicit terms, to eulogise about the prospect of ecstasy.

Open a recent evangelical advice book and you will read comments like this one: “Some people have the mistaken notion that God is anti-sex … in fact, he’s outspokenly pro-sex! He invented it. What an incredible thought! Passionate sex was God’s idea.” Or: “Orgasm is an integral part of God’s design for sex.” Evangelical writers even coined a catchy new term – “soulgasm” – to describe the almost indescribable joys (physically incredible orgasms plus intimate emotional connection with the husband plus the presence of God) that await the evangelical wife. How the husband can become a “Superman-lover” and make his wife come repeatedly, how breasts and penises can be most sensually caressed, how a man might do the “come-hither” move around his wife’s G-spot, and (yet more good news) how the Bible does not forbid either sexy lingerie or vibrators: all of that can be found in the evangelical guidebooks. 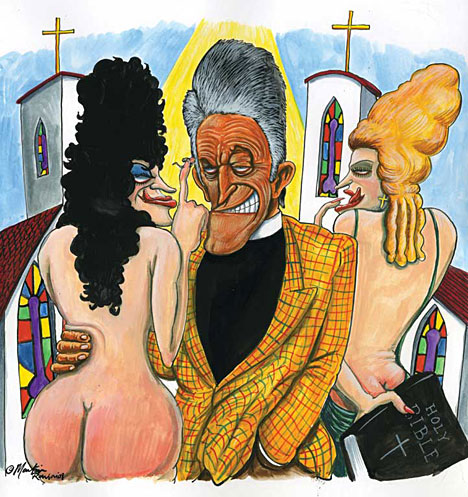 It’s hardly news that the fundamentalists have for some time used physical health to scaremonger, exaggerating the dangers of sexually transmitted diseases (lumping treatable and untreatable diseases together for maximum scare value) while also denigrating the effectiveness of condoms.

Now, though, the fundamentalists have moved into the realm of psychological health, even taking over the language of New Age therapy. Suddenly the mainstream conversation in women’s magazines and on daytime talk shows is not so much about physical danger as about self-esteem. Or rather: its absence. People who sleep around have low self-esteem. Porn use is a sign of low self-esteem (in addition to being “addictive” and causing erectile dysfunction). Prostitutes have “devastatingly low levels of self-esteem”. Even the supposedly kinder, gentler homophobia that has replaced the ugly old disgust-mongering rides on the self-esteem theme. Children of gays and lesbians are likely, we are now told, to suffer from low self-esteem.

Naturally, abortions are also now said to reduce self-esteem and trigger mental illness. Last year the Supreme Court upheld the Partial Birth Abortion Act, originally passed by the US Congress in 2003. This act criminalised certain methods of abortion that are used in less than one per cent of all abortions performed – and then only in order to preserve the health of the woman. The majority opinion authored by Justice Anthony Kennedy clearly reflected the influence of the Religious Right’s sustained and sophisticated campaign over the last decade to link diminished female self-esteem and negative emotional consequences (like post-abortion depression) to reproductive rights. Now opposition to abortion rights was understood by a majority of the members of the Supreme Court as the properly pro-woman perspective.

An authoritative review by the American Psychological Association, published recently, has comprehensively rebutted the claim of the Religious Right that abortion is linked to psychiatric problems. Yet the Supreme Court’s decision stands, and many doctors have good reason to worry that, under that law, all second-trimester abortions could be interpreted as criminal.

The premarital abstinence campaigns and abstinence education in the schools are the most obvious other examples of the new secularised mental health strategy. (The reasons are telling as well. Framing sexual conservatism as mental health promotion has become the main tactic for avoiding being taken to court by the American Civil Liberties Union for bringing religion into the public schools and eroding the boundary between church and state.) Websites and books that plead for premarital chastity invariably contend that delaying the onset of sexual intercourse is a sign of heightened self-respect. Scholastic or athletic achievement is presented as mutually exclusive with sexual activity. Virgins, it is said, have “better life outcomes”. In 2006, the federal government required any program wishing to receive federal funding for sex education to include the “information” that adolescent sexual activity could lead to depression and suicide. In 2008 the Centers for Disease Control, in their report on youth and risk (seatbelt use, alcohol, etc.), treat sex itself (not just unprotected sex) as a risk behaviour.

Secularising its message allowed the Religious Right to repackage repression as the promotion of mental wellbeing. That which used to be deemed immoral is now presented as likely to induce depressive feelings of self-loathing. In dozens of variations, Americans are taught these days that any sex outside marriage – or even emotionally disconnected sex within marriage – is evidence of “low self-esteem” and something that will inescapably lead to “depressions”.

The success of the Religious Right on this topic is remarkable. It’s especially evident in the way that many self-defined sexual liberals now rush to concede that a delay in sexual debut is desirable, that abstinence is “a laudable goal”, and that keeping the number of sexual partners in a lifetime to a minimum is an important sign of psychological health and self-valuing. Sexual experience is no longer seen as a resource, but rather a matter of risk and regret. Female sexual agency has once again been made dirty and suspect. Shaming is the new name of the game.

Yet while these books market themselves as compassionately concerned with women’s pain in face of husbands whose eyes wander, they are actually quite insidious in their encouragement to wives to offer their husbands “quickies” even when they are not in the mood themselves – on the argument that this will help to redirect their husbands’ desire. The books bank on the idea that American marriages are a wasteland. Literally, they tell wives that when a man is going “cold turkey” on porn, “be like a merciful vial of methadone for him.” (And incidentally, they also tell women to stop fantasising and to focus 100 per cent on pleasuring their husbands – because only that total focus can create “true intimacy”.)

No less intriguing is the way the books eagerly confess evangelicals’ own sins: they are full of bragging about all the rugged studly sex the authors had back in the day before they found the path of righteousness, the prostitutes they went to, the marital infidelities they engaged in, the abortions forced on lovers. This is evangelical confessionalism with a post modern, exhibitionist twist. Most importantly, it effectively preempts the old liberal technique of muckraking exposé of conservative hypocrisy.

Why does any of this matter? One answer is that sex education in the US is in tatters. The country is not just withholding information but actively lying to its young people. Federal guidelines mandate that high school students be told that “sexual activity outside of marriage is likely to have harmful psychological and physical effects.” This is simply false and cruel. It disempowers young people – girls and women in particular. We are living through an assault on female sexual independence. And meanwhile, the US has the highest rates of STDs, unwanted pregnancies and sexual coercion in the developed world, the lowest contraceptive use and the highest rates of abortion.

European sexual politics are surely not perfect, but it is striking that in Europe sexual rights are defended by Christian Democrats as well as Social Democrats. Indeed, in the struggle over how to make room for European Islam it is often representatives of conservative political parties who have most strongly insisted on the need for those who want European citizenship to affirm their comfort both with homosexuality and with female sexual independence. Europeans went through an arduous but important postfascist learning process – and it shows. The stance of the European Court of Human Rights, developed in reaction to the experience of Nazism, simply starts from the premise that it is the task of the law not just to protect individuals against sexual violence and abuse, but also to protect each individual’s right to desired sexuality. Self-determination and consent are considered the most important moral values. Americans have let themselves too long be bullied into losing their ability to defend those values.

Trump wasn’t an aberration: he only renewed the US nation’s bitter, uncivil war over whether a clear majority of its people want to forge a republic of equals. The challenge for Biden will be to assert his ‘American ideal’ over the competing vision that Trump has left behind.

The US is facing a twisted, belligerent reality: rioters brazenly revealed their identity in an unmasked raid on the Capitol; the ‘Save America’ rally undermined the constitutional process; and incitement came from the person at the very top of the institutions being debased. All while COVID-19 is on the rise as America’s deadliest threat.