Romania: Why corruption will last

The presidential referendum controversy represents an all-time low for post-communist Romanian politics, writes Valeriu Nicolae. Corruption isn’t likely to disappear any time soon, since an honest political elite working to reform society would lead to a collapse of the entire system.

At the beginning of summer there were signs that the upcoming period would be a good one for Romania. Former prime minister Adrian Nastase – recognized as one of the most corrupt politicians in Romania, even within the ranks of his own party – received a two-year prison sentence. The liberal democrat government (PDL), after failing completely to halt the rampant corruption among the political elite, was kicked out of power. Several of the most controversial ex-ministers resigned or were forced to resign after losing in the elections by a large margin. The new prime minister – a smart young man – nominated a number of well-known experts and public personalities as his advisors. The transition government included, for the most part, ministers with good previous records. Despite the fact that some of Nastase’s closest political allies still held key positions in the government, all in all it looked much better than previous governments. 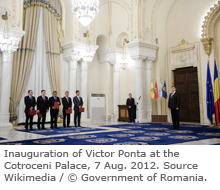 What followed was unexpected. Nastase attempted suicide (or at least, made a good show of doing so), prompting a government reaction that could be interpreted as a clever attempt to manipulate public opinion towards a presidential pardon. Fortunately, president Traian Basescu resisted the huge pressure in the days that followed and Nastase ended up in prison. Slowly but surely, the mass media have started to ask uncomfortable questions about what really happened during the hours before and after Nastase’s suicide attempt. Some appalling decisions were exposed and people are still under investigation.

The new ruling coalition absorbed some of the most corrupt, but not very visible MPs from the PDL – happy to jump boat and stay in power – a sine qua non of having access to the state contracts they depend on. The coalition needed them to convincingly control parliament and senate. Once this happened, the coalition quickly moved to take over the state institutions, and then managed to suspend the unpopular Romanian president – Basescu still has considerable powers and is a serious obstacle for the government. A referendum to clarify the position of the Romanian electorate was held at end of July. There were significant failures in the process: some laws were seriously bent, others were broken altogether.

Basescu and his party called for a boycott of the democratic process, since his only chance of staying in power was if less than 50 per cent of the electorate turned out to vote. Sure enough, the turnout at the referendum was just over 46 per cent. Over 7.4 million people still voted against Basescu (just over 5 millions voted him in office in 2009). The government put serious pressure on the constitutional court to declare the referendum valid, claiming that the fewer people were eligible to vote than entered on the electoral lists. Pressure came from Basescu and his party, which had put forward the majority of judges in the constitutional court; the rest were nominated by the ruling coalition and the Hungarian party. On 21 August, the court decided that the referendum was invalid – meaning that Basescu will be back in Cotroceni.

The campaign preceding the referendum on Basescu’s dismissal and what followed represents an all-time low for post-communist Romanian politics. A number of serious scandals erupted. Basescu showed he controls a good part of the powerful secret services and has significant influence over the prosecutors of the National Anti-Corruption Department. Transcripts of phone calls were leaked to the press that proved the corrupt way in which senior judges attempted to secure nomination for the most powerful positions, while intense pressure was put on the minister of administration and the interior to force a validation of the referendum. The interior minister resigned fearing he would “end his days in prison”. The government also made public also a number of documents showing that Basescu had spent significant amounts of public money building a luxury villa for his retirement while advocating strong austerity measures for all Romanians.

The ad interim president Crin Antonescu, a member of the ruling coalition government and successor in waiting to Basescu, made some terrible mistakes. He accused the American ambassador of being an ally of Basescu; he blamed the Hungarian minority for the failure of the referendum (the counties in which they are in the majority had the lowest turnout); a video of him talking in a very poor English to the IMF delegation proved him incapable of seeing his own limitations and of being in charge of the Romania’s foreign affairs.

The ruling coalition nominated a controversial judge for the job of minister of justice. Days after the nomination, a photo of her stepping into the car of Nastase’s older son was leaked to the press. The new prime minister, Victor Ponta, has been proven to have lied about a master’s degree and to have plagiarized a significant part of his PhD. The political rhetoric is vitriolic. Top-level politicians regularly call each other thieves, crooks and mafioso.

Romanian society is dangerously polarized and public disgust for the political class has reached a dangerous point. The situation became so critical that the US sent a special envoy to Bucharest signalling serious concern about Romanian democracy.

How did we get into such a mess in such a short time?

Simple: our political system and our society are profoundly dysfunctional. None of the existing political leaders has the legitimacy to talk against nepotism and corruption. Most of the Romanian political elite have a disastrous record outside politics. The new top politicians have no professional experience outside the jobs they received thanks to political affiliations, while most of their predecessors were closely connected to the Communist Party. Most of the richest people in Romania have built their fortunes on the basis of political connections or their positions within the leading parties.

Both Antonescu and Ponta were remarkably mediocre before joining politics. Both their wives received good positions on the party lists and were elected to the European Parliament – one of the best paid jobs possible for a Romanian politician. Daciana Sarbu, Ponta’s wife, is the daughter of one of the most influential and oldest leaders of the Socialist Party. According to her CV, she has almost no work experience aside from political jobs during Nastase’s leadership. Adina Valean, Antonescu’s wife, had a career explosion during the time her husband was a government minister. She catapulted from being a primary school maths teacher to a director of the ministry led by Crin Antonescu. Admittedly, Ponta has said that as long as he is the president of the Socialist Party, his wife will not hold a political job. But he has also said that he will resign if his PhD thesis is proven to be a fraud. The University of Bucharest says it is.

Meanwhile, Basescu’s daughter’s career path was appalling even by Romanian standards. In an incredibly short time she moved from being a rather exotic photo-model to the leader of the PDL youth and then to the European Parliament. His other daughter became a notary, one of the best-paid jobs available in Romania and almost impossible to get without very good connections. Former prime minister Calin Tariceanu also managed to get his ex-wife a similar position.

Major corruption scandals were exposed while the PDL – Basescu’s party (now the opposition) – was in power. Inept and profoundly corrupt people were named as ministers and promoted to the highest echelons of the party. The organization of PDL in Bucharest was an example of horrendous decisions and leadership. The existing leadership includes some of the richest and most crooked politicians in Romania.

How, then, can anybody in the leading Romanian political parties dare to talk about nepotism? Our political leaders engage in nepotism regularly and visibly.

Romanian politicians are also adept at cutting corners. Not only did Ponta cheat the educational system; many others, in all parties, did the same. In fact, plagiarism is rife among the entire recent generations of students.

Cheating is normal within Romanian society. More or less everybody does it or accepts it. Bribery is widespread. Romanian society needs corrupt politicians in order to function. An honest political elite working to reform society would lead to a collapse of the current system, since a large number of leading business people, journalists, judges, teachers, academics, leaders of civil society and unions would have to be dismissed and some imprisoned. The higher educational degrees of many major politicians would have to be reviewed and in many cases annulled.

Journalists depend on scandals (they sell the best), bribes and advertising. Most advertising comes from the state or from companies that are more or less closely connected to politics. There is no truly independent media outlet in Romania and the overwhelming majority of Romanian journalists have been or could be bought. A close advisor to Antonescu is Horia Rosca Stanescu, one of the most corrupt journalists in Romania and a proven former collaborator of the Communist security services. The mass media is as hypocritical about corruption as the leading politicians.

A powerful politician once told me in what I think was a moment of truth – he was inebriated at the time and unable to realize that I wasn’t a member of his party – that the only way anyone possibly becomes the leader of a party is if he “can be blackmailed. Otherwise, he could fuck us all up.”

No need for that: it appears we already have been.

‘But this is the world we live in’

The strategies that Romanians employ to negotiate the capitalist economy are much like those they used under socialism. Nepotism and bribery are seen as necessary for navigating a broken system. At the political level, however, recent anti-corruption campaigns have brought spectacular results. Jill Massino examines how the shift to a market economy and ongoing corruption have affected individuals’ civic identities, everyday practices and perceptions of the state and the EU.

‘Mystification is a brutal process’

On the paradoxes of Romanian identity

In an interview with Andrea Pipino, Romanian historian Lucian Boia talks about Romanian identity from its Roman-Dacian beginnings through Ottoman and Austro-Hungarian rule, modernization, fascism, communism, and the paradoxical present, in which this extremely nationalistic country has no openly nationalist political party.