The Belarus Revolution started in 2020 after a rigged presidential election. It ended, at least to outward appearances, with Lukashenka’s brutal repression and stricter outlawing of future protests. But, for many, the struggle continues: a new study on protestors’ recollections refutes the perception that the revolution failed.

Belarusians who fled abroad after mass protests against the country’s repressive government under president Alyaksandr Lukashenka are determined that their struggle, which began in 2020 against the regime, is not yet over. This is according to a study conducted by the Belarus Research Group at the Institute of International Relations and Political Science at Vilnius University (TSPMI). Among other work, the Research Group is currently collecting oral recollections from protestors to preserve the country’s historic memory.1

The Research Group undertook interviews with Belarusians who fled to Lithuania to escape the persecutions that began in the autumn of 2021. Belarusian citizens from a wide range of professions – manual workers, as well as representatives from IT and the cultural and creative industries – responded to the researchers’ invitation to share their stories. These people, from different socio-economic classes and age groups, were all involved in some way in the uprisings of 2020.

According to TSPMI researcher and PhD student Vilija Navickaitė, all the people she interviewed had experienced repression. Many had been detained and later persecuted or monitored by the regime’s law enforcement structures: ‘Many of them were imprisoned – usually for ten days or even several times longer. In addition to taking part in the protests, some interviewees were actively involved in building local communities, as well as mobilizing fellow citizens or their neighbours to be active in joint cultural or other activities. They were often subject to administrative or even criminal proceedings in Belarus.’

The research finds that there are two senses in which dismissals of the Belarusian uprisings ‘hurts’ Belarusians: first, it insults their struggle, and fails to understand its nature as ongoing rather than a finite event; second, it minimizes rather than amplifies the collective desire for change, and for freedom.

According to Navickaitė, many of the Belarusian citizens she interviewed see great importance in contributing to the ongoing struggle for change in Belarus, including raising awareness of what has happened there: ‘The important thing is that none of the Belarusians we interviewed think that the revolution has been defeated, or that it ended in failure. For example, when someone at an international conference on Belarus at the Institute last autumn discussed what would happen after this “failed” revolution, the Belarusians felt insulted by this attitude.’

Many in Belarus believe that their struggle has only just begun, which the researcher is inclined to believe: ‘If we think about Ukraine, from 2004 to 2014 – from the Orange Revolution to Maidan – it took a long time for major changes to happen and to alter the prevailing order. The men and women of Belarus may doubt that protests on the scale of those that followed the fraudulent presidential elections in the summer of 2020 will happen again anytime soon, but they certainly don’t think that their struggle is over and that people currently living in exile will never return home.’ 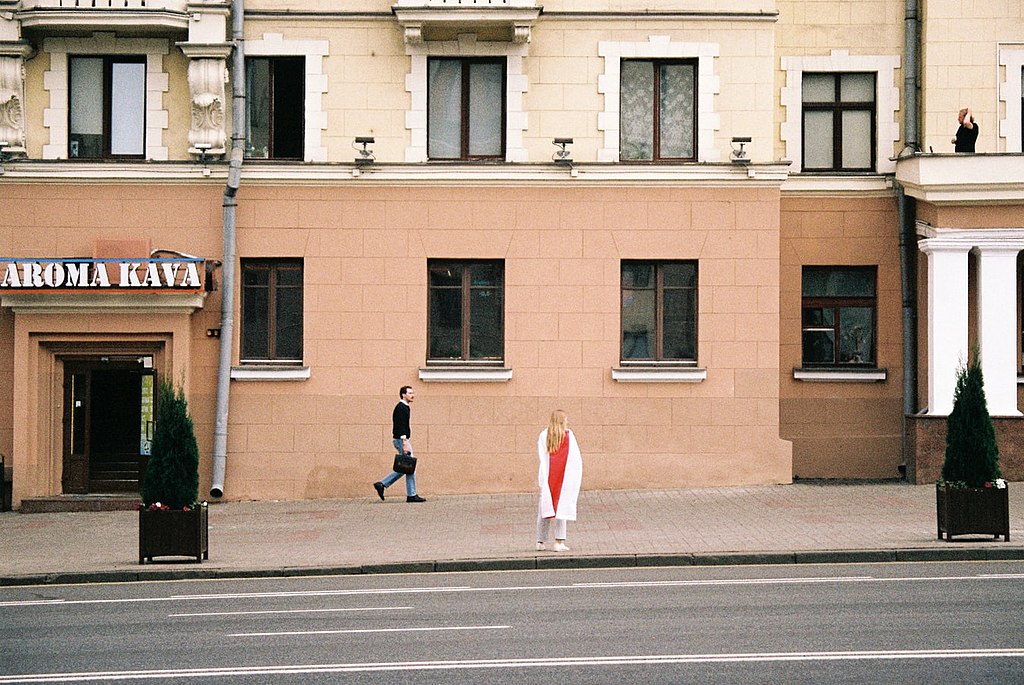 Finally, there was an understanding among interviewees that it was not just a few hundred, nor even a few thousand people who protested, but a significant proportion of Belarusian society. While many of these people are now afraid and hesitant to take to the streets, the movement has not disappeared.

According to Navickaitė, many of the Belarusians interviewed talked about the fact that the whole world has finally heard about their country, whereas it used to seemingly mean nothing. The stories of these Belarusians show that taking part in protests mobilizes the consciousness of the public, filling them with adrenaline, euphoria and pride. People start to feel empowered and realize that their voice matters, and that those who want change are indeed in the majority. Navickaitė notes that in the course of the uprisings, Belarusians ‘came to feel that they are members of a nation, with a strong sense of pride and other feelings that had seldom been clearly expressed before’.

A collective desire for freedom

According to Navickaitė, Belarusians are eager to share their memories and opinions not only about the protests but also about life in Belarus before the summer of 2020.

The Belarusian struggle is united by a desire for change. People no longer want to live as they do under Lukashenka. During the protests, a number of related demands were made – for peaceful change, for free and fair elections, and for the end of the Alyaksandr Lukashenka era.

That said, it is not very easy for the Belarusian population to define what elements of the old life they want to change – which are unacceptable and which could still remain. As Navickaitė puts it: ‘It’s not entirely clear what life would be like after the change, or what is meant by “we want to live differently”. This probably requires separate processes within the nation to identify the goals and directions in which the Belarusian men and women want to move, and want to see their country move.’

Navickaitė explains that the individuals interviewed have varying views on this matter: ‘Some see Belarus moving towards the values and way of life of the European Union, while others don’t see that at all and want the country to remain neutral, not joining either the Commonwealth of Independent States or the European Union. It is evident that there is no clear common understanding about the future Belarus.’

Interviewees agreed unanimously, however, that their main demand is for Lukashenka to step down and for free elections to be held in Belarus, so the people can truly choose their leader. Navickaitė reports that during the interviews, respondents often emphasized the desire to be heard and to be able to make their own decisions about the future. She notes, ‘During the 2020 protests in Belarus, we saw many slogans against the violence of the regime in support of free and fair elections. Of course, it all started with the fact that the presidential election process was riddled with fraud and was rigged from the very beginning: candidates were detained or not registered, independent observers were not allowed to go to the polling stations, electoral activities were restricted, and so on. Finally, shortly after the elections were held, the regime burned the ballots so that they could not be recounted.’

Belarusians believe that they have succeeded in starting a whole new phase of their own lives and in the life of their country. Rather than viewing the cessation of the protests as an ending, many interviewees see this as part of a process of moving towards important, much-needed change. As Navickaitė concludes, ‘Everyone can agree that the year 2020 was filled with a lot of painful experiences, but no one is going to lose hope that one day Belarus will be a free country, where everyone’s voice will be heard.’

This material could also later be used for further analyses by other political scientists at TSPMI.