Public loss of faith in science

A year into the COVID-19 pandemic, a public whose freedom has been dictated by science is showing signs of scepticism. ‘Esprit’ examines the vexed relations between science and public opinion when scientific truth no longer inspires unquestioning trust.

Throughout the pandemic politicians have hidden behind the authority of a monolithic ‘Science’, writes Isabelle Stengers in Esprit. Yet the procedures that lead from actual scientific work to the authority of the ‘objective’ are never pure: objectivity is always constructed. Engaging with this process of construction means descending from the lofty ideals of ‘Science’ and the scorn for belief and public opinion.

Following Bruno Latour’s call for a ‘becoming-terrestrial of the sciences’, Stengers argues that scientists can no longer excuse themselves by rejecting the ‘politicization of science’. It is imperative that they renounce their imaginary status as saviours capable of vanquishing all complexities, concerns and beliefs with absolute objectivity. 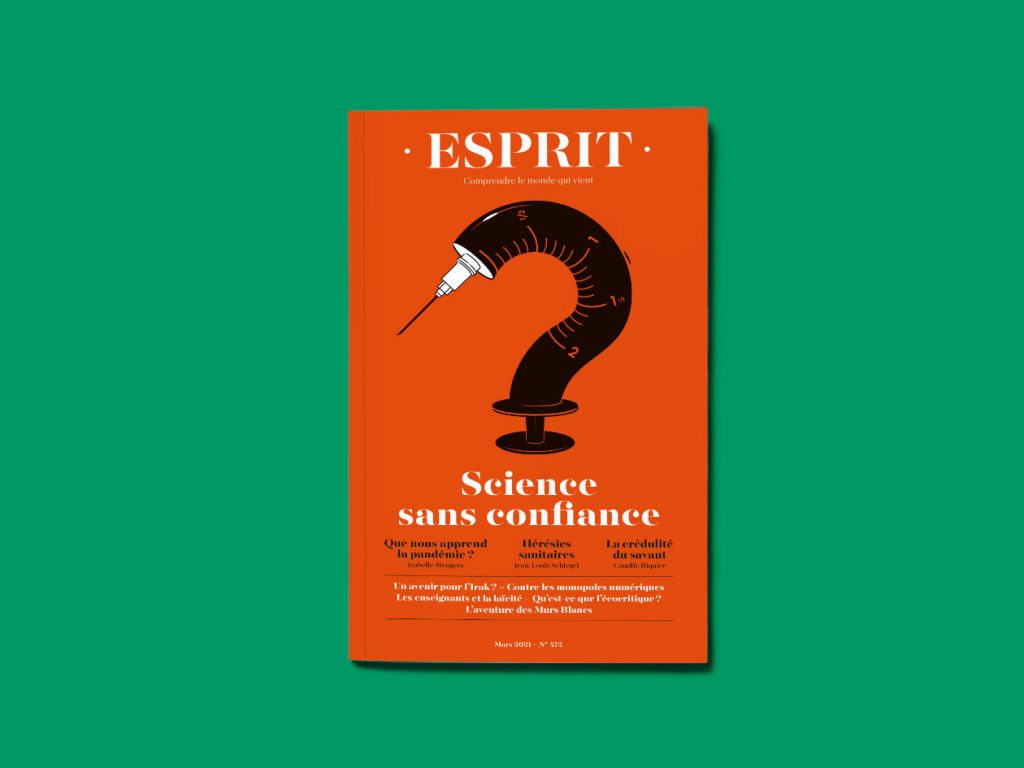 Tell us what you don’t know

Friedrich Nietzsche challenged his contemporaries to free themselves from scientific ‘piety’, pointing out continuities between theology and modern faith in science. Today’s flood of epidemiological and medical data reveals a further consequence of this faith, argues Michaël Fœssel. Disappointment in scientific knowledge can degenerate into mistrust and hostility, especially when science is used as a rationale for radical social interventions.

This calls for a ‘de-dramatization of the relation between our beliefs and the truth’, according to Fœssel. In order to prevent science being the subject of either dogmatic adherence or hostile suspicion, scientists must renounce their priestly status and inform the public about what they don’t know.

Progress at the expense of humans

In his recent book Apocalypse Cognitive, Gérald Bronner places himself squarely within the Enlightenment tradition of progress. However, as Camille Riquier writes, any contemporary partisan of progress must contend with the fact that it is the products of science and technology that have permitted the spread of religious fundamentalism and conspiracy theory. Technologically emancipated cognitive potential has been squandered, with the internet’s deregulation of the ‘cognitive market’ unleashing irrational human impulses and biases.

In his eagerness to counteract pessimism, Bronner ends up appealing to the ‘transhumanist’ fable of the liberation of cognitive potential through artificial intelligence. Riquier warns that we should be wary of falling prey once again to the ‘superstition of progress’ – especially when it involves subordinating the human to the machine.

In a special report, authors revisit the Iraq War and its impacts on culture, diversity and the mental health of Iraqis. The real causes of violence can only be overcome by an effective project for national reconciliation and reconstruction, in which ‘the role of civil society will be crucial’.

The European Commission’s Digital Markets Act is ‘an essential step’ toward reining in the great giants of the digital economy, writes Cedric O. Seen in the context of historical antitrust laws and the political projects that drove them, the Act’s renewed call for economic reform opens a crucial ‘new chapter’ in public regulation.

Read form this issue of Esprit in Eurozine: