Protestors aren’t destroying history, they are recasting it

Campaigns to remove monuments commemorating racism, slavery and empire are criticized for attempting to erase history. But anti-racists protesting the public prominence of these statues are challenging what history is remembered, in order to make way for a fresh lens on the past.

In the aftermath of George Floyd’s murder at the hands of police, the movement to remove Confederate monuments has accelerated rapidly as part of a new wave of Black Lives Matter demonstrations. Protestors argue these monuments represent institutional racism and should be removed immediately. Many governors and local politicians readily agree – even in strongholds of the former Confederacy like Richmond, Virginia, and Birmingham, Alabama. Amidst similar protests in the United Kingdom, statues of former slavers and colonizers have also been targeted and slated for removal. The toppling of Edward Colston’s statue, a major figure in Britain’s slave trade, revived demands first made in 2015 that the statue of Cecil Rhodes, located at Oriel College, Oxford, be removed. In the past week, the governing body of Oriel, which includes its provost and fellows, affirmed its support for the statue’s removal. 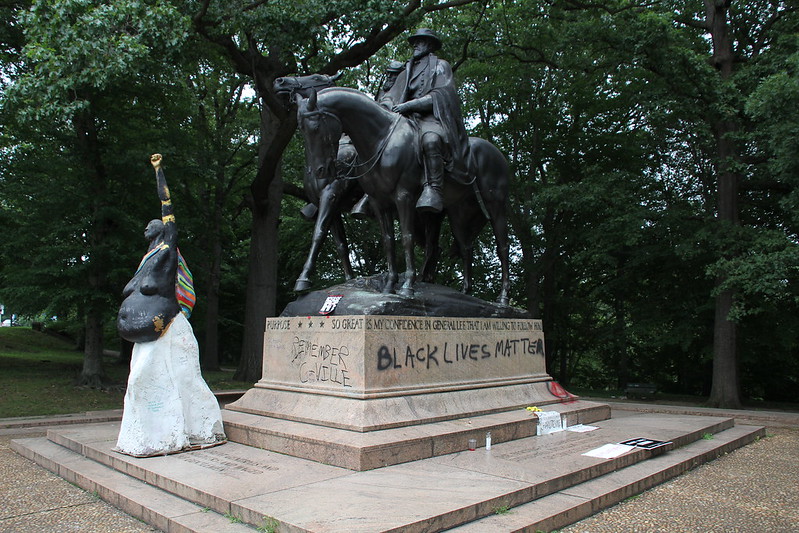 Public intervention at the Stonewall Jackson and General Lee monument in Baltimore, 2017. Photo by Ryan Patterson from Flickr.

A major character in this drama is history itself. Critics on both sides of the Atlantic decry what they view as disrespect for the past, and consider the removal or destruction of monuments to be an attempt to erase or ignore history. But we disagree: anti-racists who are protesting the public prominence of these statues are deeply engaged in historical thinking. They are challenging what history is remembered to make way for new values and a fresh lens on the past that elevates what, and who has been forgotten. As Brent Leggs, director of the African American Cultural Heritage Action Fund at the National Trust for Historic Preservation, has argued, ‘the kinds of places and structures that we protect are less an indication of what we valued in the past than a matter of what we venerate today’.

In the past, Black citizens did not have a say about how national history was depicted; they should have a say now.

In the case of the United States and United Kingdom, Confederate and colonial monuments to individual historical ‘heroes’ are not historic: they are nostalgic. These monuments were built long after these figures died, and were often erected at moments when white supremacy was under attack. In the United States, most Confederate statues were installed during the Jim Crow years of the late nineteenth and early twentieth centuries and during the civil rights movement of the 1950s and 1960s. Installed from 50 to 100 years after the Civil War ended, they do not represent a true history of the war, but a longing for the white supremacist social order that war represented. Similarly, in the United Kingdom, the statue of Colston was installed in the center of Bristol in the 1890s, over 150 years after he died, and as the European colonial order was beginning its slow demise.

In both cases, the history represented was partial. Black people in both the United States and the United Kingdom were sidelined from discussions about these markers, monuments, and other historical plaques.

But Black people were not without agency. These public monuments tended to proliferate when the racial legacy, and the history, of slavery and colonialism was challenged by new generations of anti-racist activists. During the 1950s and 1960s, Virginia and Texas in particular launched yet another wave of historical markers and monument-making that commanded the public to ‘remember’ Civil War ‘heroes’. Some anticipated the Civil War Centennial of 1963; others were part of a cultural backlash to a growing civil rights movement. One marker that still stands in Aspermont, Texas, reads, ‘Texas made an all-out effort for the Confederacy after a 3 to 1 popular vote for secession … A 2,000-mile frontier and coast were successfully defended from Union troop invasion and savage Indians.’ While these are lesser-known and often smaller monuments, is it this ‘history’ – one which leaves out armed rebellion and slavery, and portrays the Confederacy as a democratic resistance – that we ought to remember?

In 1960s Texas, only a limited number of white people decided how to commemorate the Texans who served the Confederacy. These were political, not historical, decisions. County or city judges, members of local and state historical commissions, and some local citizens determined where the historical markers – funded with public monies – would be placed. Mostly, they were erected on courthouse lawns so that the public could view them, but also, perhaps, so that this central civic office was also marked as a monument to white supremacy. Sheriffs and representatives attended the installation ceremonies: one local newspaper dubbed their ceremony ‘rebs remembered’. And although recent conflicts over these memorials feature state capitols and flagship campuses, markers also proliferated in small communities like Alpine, Texas.

Statues in the United Kingdom also appeared at moments of crisis when history was called upon to protect the white racial order that undergirded English colonial expansion. Funded by private donations, the Colston monument was installed in Bristol’s city center on the cusp of the British war in South Africa, an effort to expand England’s empire on that continent. When a subscription drive failed to raise enough money to install the statue, a local Bristol businessman donated the remainder.

That isn’t a coincidence: such monuments celebrated English commerce while obscuring the traffic in souls and indigenous displacement that made such commerce possible. Cecil Rhodes, who had died in 1902, had many followers who had been made wealthy by mining. A ‘cult of Rhodes’ developed in the 1930s, leading to multiple monuments to Rhodes being installed in South Africa and across Britain. Although officials in London refused to erect a monument to Rhodes in Britain’s capital city, officials at Oriel College in Oxford agreed to the installation of a Rhodes statue in 1932. In the 1930s, when the white settler minority party led by Jan Smuts, who was friendly to British interests, was challenged by political groups hostile to the British empire, a statue reminding Britons and white South Africans of Rhodes’s importance in settling Africa was one of the more visible ways to whitewash history and buttress their claims.

The 1960s and the current moment in 2020 seemingly share few similarities except for the engaged, widespread, and passionate global protests that, today, energize the movement to remove Confederate and colonial statues. This moment in 2020 offers an opportunity, not for Black people to erase the past, but to be at the forefront of deciding ‘not only what history we preserve but what we think it means to preserve it’.

These moments drew from an already existing global visual lexicon about the relationship between statues, history, and protest. When a group of anti-racist Black Lives Matter activists pulled down the 12-foot bronze statue of Edward Colston from its plinth in Bristol, the activists deliberately drew from particular visual symbols that enabled them to claim their place in history. They rolled the Colston statue one-quarter of a mile and dumped it into Bristol Harbor, pushing it off a dock that had likely been used by Colston’s ships as they set off to transport enslaved Africans to the Americas. Before they dumped the statue, protestors put their feet on Colston’s neck to replicate the actions that led to the death of George Floyd.

Rather than denounce these protestors as indifferent to history, we would do well to acknowledge that targeting and destroying statues is a way to transform the history told by those who installed them in the first place. Much as the statues were themselves efforts to solidify a particular version of history, their toppling represents an organized effort to recast the way we understand the histories that nations, and empires, were built on racism, colonialism, and slavery. 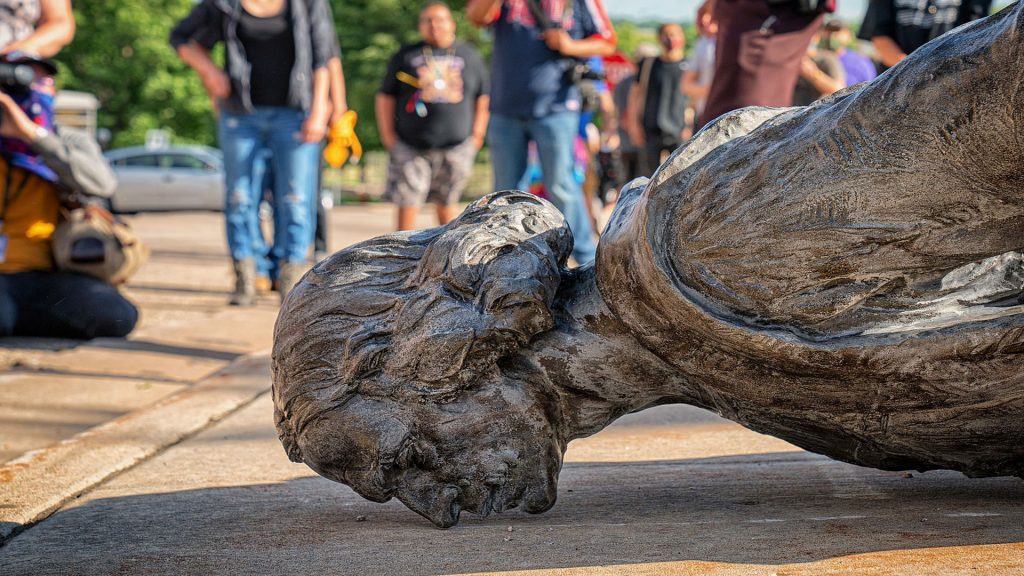 The fallen Christopher Columbus statue outside the Minnesota State Capitol, after a group led by American Indian Movement members tore it down on 10 June 2020. Photo by Tony Webster, Flickr