Faced with the reality that renewables will be unable to replace conventional energy sources in the foreseeable future, arguments for nuclear power – that it is the cleanest and least expensive option – are causing environmentalists to reconsider, writes Angela Saini.

The fight has already been lost. Exactly a year ago, the British government confirmed rumours that a new generation of nuclear power plants would go online by 2020. “They’re wrong,” insisted Greenpeace. “Nuclear power is not the answer,” implored Friends of the Earth. But when their pleas fell on deaf ears, for many environmentalists, it was final, uncomfortable proof that most people simply don’t hate nuclear power.

In fact some greens are even switching sides. Environmentalists for Nuclear Energy (EFN), a group that once may have been considered an oxymoron, today boasts more than 9,000 members in 60 countries. At its base in Paris, founder Bruno Comby is building extra space in his new eco-home to store the stacks of membership forms and correspondence he receives. The group has a catalogue of high-profile supporters, including James Lovelock, the so-called “father of environmentalism” and author of The Gaia Theory, and Patrick Moore, a former director of Greenpeace International. In 2008, green activists George Monbiot and Mark Lynas both also admitted that they would be prepared to consider nuclear power, under pressure to find non-carbon solutions to the energy crisis created by climate change. 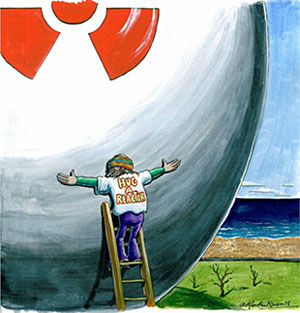 “In some ways we think religiously about this topic,” George Monbiot admitted as I filmed him for a documentary about nuclear power. “People start with a pre-existing position of being anti-nuclear and then go out and find the evidence to justify that position. Faced with this enormous challenge of climate change, we have to throw everything useful at the problem that we can, and it’s now beginning to look as if nuclear power might be more useful than we first thought.” This may seem a rational enough plea, but it flies in the face of the most entrenched tenet of the green movement: nature is not to be tampered with. Chopping down forests and endangering wildlife are reprehensible, but what could be worse than splitting nature’s basic building block, the atom?

When the eponymous logo of the Campaign for Nuclear Disarmament turned 50 last year, it was remarkable to see that it had kept the power to evoke the same emotions felt by courageous protestors at Aldermaston decades earlier. And for those green activists belonging to the Aldermaston generation, the nuclear question cuts to the heart of their movement. Many have asked whether it is even ideologically possible to be both green and pro-nuclear, which makes it all the more incredible that a few have swallowed longstanding beliefs and embraced nuclear power.

“We’ve been opposed to nuclear power since our inception,” Nathan Argent, a nuclear campaigner for Greenpeace, told me. “And our objections are made through a pragmatic appraisal of nuclear power. There are more effective and much cheaper ways of dealing with climate change.” Even as more environmentalists begin to accept nuclear power, Greenpeace and Friends of the Earth have doggedly maintained that the solution lies in simultaneously slashing fossil fuel usage while ramping up the proportion of renewables in the energy mix. The trouble with this, in the UK at least, is that wind and solar provide only intermittent power depending on the weather conditions. A major move towards alternative energy would still need a constant, baseload source of power, which so far only fossil fuels or nuclear power can provide.

Scientists and engineers have been left with the mammoth task of convincing the public, many dedicating their lives to improving standards in the nuclear industry. In the effort to lose the chronic image problem it has endured under the dark shadows of the Chernobyl disaster in 1986 and Three Mile Island in 1979, nuclear power is now the world’s most regulated energy source, overseen not only by dedicated national bodies but also the UN’s eagle-eyed International Atomic Energy Agency (IAEA). Consequently there hasn’t been a major nuclear incident since the 1980s. The meltdown at Three Mile Island, which was by any estimate the worst nuclear accident in the West, raised local levels of radiation in the atmosphere to only marginally above everyday background levels. To this day, not a single radiation-related death has been attributed to the accident.

Len Green, an engineer who helped build Sizewell B nuclear power station on the Suffolk coast, explained that modern plants are engineered to meet every possible contingency, including the kind of employee negligence that lead to the explosion at Chernobyl: “The designs have to be thoroughly assessed, then every stage of construction is assessed, and when they’re operating, they’re assessed.” According to Professor Robin Grimes, a materials physicist at Imperial College London and former researcher at the US Los Alamos National Laboratory, they’re not just safe, they’re foolproof: “The new designs of power stations use passive systems, which means that they automatically behave in such a way as to shut the reactor down. The operator doesn’t even have to take any action at all.”

The oft-repeated green allegation that nuclear is too expensive holds even less water than the claim it is unsafe. Although a new power station demands a hefty capital investment, when costs are averaged over its lifespan, it is cheaper than oil and gas. And when the costs of carbon capture and storage are factored into the price of fossil fuels, nuclear comes out firmly on top. Meanwhile, renewables cannot even hope to compete on price: a 2004 UK Royal Academy of Engineering report found the cost of generating wind power is more than twice that of nuclear. Also, massively increasing the proportion of renewables would introduce the huge expense of extending the national grid to meet solar panels, tidal barrages and wind farms.

Indeed the latest IAEA projections suggest that raw economics are helping to drive a nuclear renaissance. Nuclear power generation is expected to grow between 27 and 50 per cent by 2030, mainly in India and China. Even Lithuania, a small Baltic state still raising its economy out of the ashes of communism, is resolutely pushing for a new nuclear power station to replace its ageing old one near the small town of Ignalina. Offering cheap electricity and the tantalising assurance of energy independence, it makes economic sense, especially since a single reactor could provide Lithuania with all its electricity needs, plus some left over. In this nation, the director of the Lithuanian Energy Institute told me frankly, green groups haven’t even attempted to block nuclear power.

“I think a number of other greens are slowly going to make the decision that nuclear power is better than the alternatives,” Prof Grimes explained. Even the most common green objection to nuclear power – radioactive waste – is being resolved. Britain doesn’t yet have a repository for spent nuclear fuel and continues to temporarily store it on the same sites as its power stations. After the new generation of reactors are switched on, they will eventually produce almost half a million tonnes of waste, some of which will remain dangerous for millennia. Contrary to green folklore, however, this is not an immutable problem. The Nuclear Decommissioning Authority, along with the country’s best geologists and teams of nuclear engineers, has already begun the hunt for a new waste site. Encased in layers of lead, cement and under hundreds of metres of rock, they are entirely confident (as are those engineers constructing similar repositories in the US and Finland) that the waste will be safely contained. In fact their working timescale is a million years, which means that the repository will outlast not only our progeny, but probably also human civilisation.

For scientists like Grimes, the nuclear debate has become a simple matter of education. The green shift in the nuclear direction is, however marginal, a triumph of rationalism over fear. And the shift hasn’t been only one-sided. Scientists and activists are used to finding themselves on opposite sides of a divide, violently clashing on topics like medical animal testing and GM crop cultivation. But pick up a copy of any science magazine these days and you are almost as likely to get advice about how to reduce your carbon footprint or recycle effectively as the latest research news. “The green argument challenges you, it makes you think about the way you apply your engineering and science. I welcome the debate,” said Grimes. Climate change has united science and environmentalism as never before: where researchers have provided the critical scientific data, greens have supplied the political momentum, and this co-operation in turn has helped achieve the gradual consensus on nuclear power.

But the consensus remains limited. The nuclear debate is still riddled with irrationalism, to the point where pro-nuclear environmentalists are often criticised by more mainstream greens simply for daring to suggest that nuclear power might make ecological sense. Bruno Comby told me that fellow activists would not force him into silence: “We’ve been attacked with vitriol. But in the end our ideas will succeed simply because we are right on a scientific level, and the truth always comes out in the end,” he said.

So how likely is it that the remainder of greens will be persuaded to join their growing list of dissenters and be swayed to the nuclear side? The signs aren’t good. Greenpeace’s opposition to anything remotely nuclear has gone so far as to slam one of the most exciting scientific endeavours of the century, the International Thermonuclear Experimental Reactor (ITER) at Cadarache in France. ITER is a multi-billion-Euro project funded by the European Union, Japan, China, India, the Republic of Korea, Russia and the USA. It aims to develop fusion power by binding pairs of atoms together, as opposed to atom-splitting fission that happens in a conventional nuclear reactor.

Fusion is a huge technical challenge, but if it succeeds it promises to bring almost limitless clean energy to future generations. It could be a green miracle, if only more greens would allow themselves to see it.

Tackling climate change requires more care. Environmentalist slogans demand respect for Mother Earth. But does it make sense to gender a planet? How should nature be perceived? And what does ‘natural’ even mean within an ecofeminist frame?