When George W. Bush announced ‘war on terror’ twenty years ago, one could be excused for thinking that the phrase had been picked indiscriminately. If those two pivotal words – ‘war’ and ‘terror’– had been turned over like cards on baize rather than materialise on his White House desk, would the instinct have been to shuffle cause and effect, deal another hand? Certainly, the notion of ‘terror’ or rather ‘terrorism’ was already on the table after 9/11, but how could ‘war’ have been chosen as the right response to violence?

Ambiguities of the European recovery strategy

War is surely a form of terror. And yet the West, initially in retaliation for those lives that were tragically taken in targeted attacks, has continued to act on the reverse notion: in this context, terror is presented as an ever-present threat and ‘this means war’.

Until, that is, former US president Donald Trump signed a much-criticized deal with the Taliban in February 2020. The viral images of insurgent commanders sitting in Afghan president Ashraf Ghani’s chair in Kabul on 15 August 2021 were testament to an agreement that had undermined the US-positioned government.

The pressured withdrawal of remaining US, ally and Coalition troops, and the panic-laden evacuation of American and allied Afghan citizens, intensified when the terror-ridden endgame of an ISIS suicide bomber took military and civilian lives in an act of dissent, countering the Taliban’s questionable promise of non-violence. Those that died add to the truly terrifying number of civilians killed in this conflict: according to Brown University estimates between 184,382 and 207,156 died in war-related violence in Iraq from 2003 to 2019 and more than 71,000 are estimated to have died in Afghanistan and Pakistan since 2001. 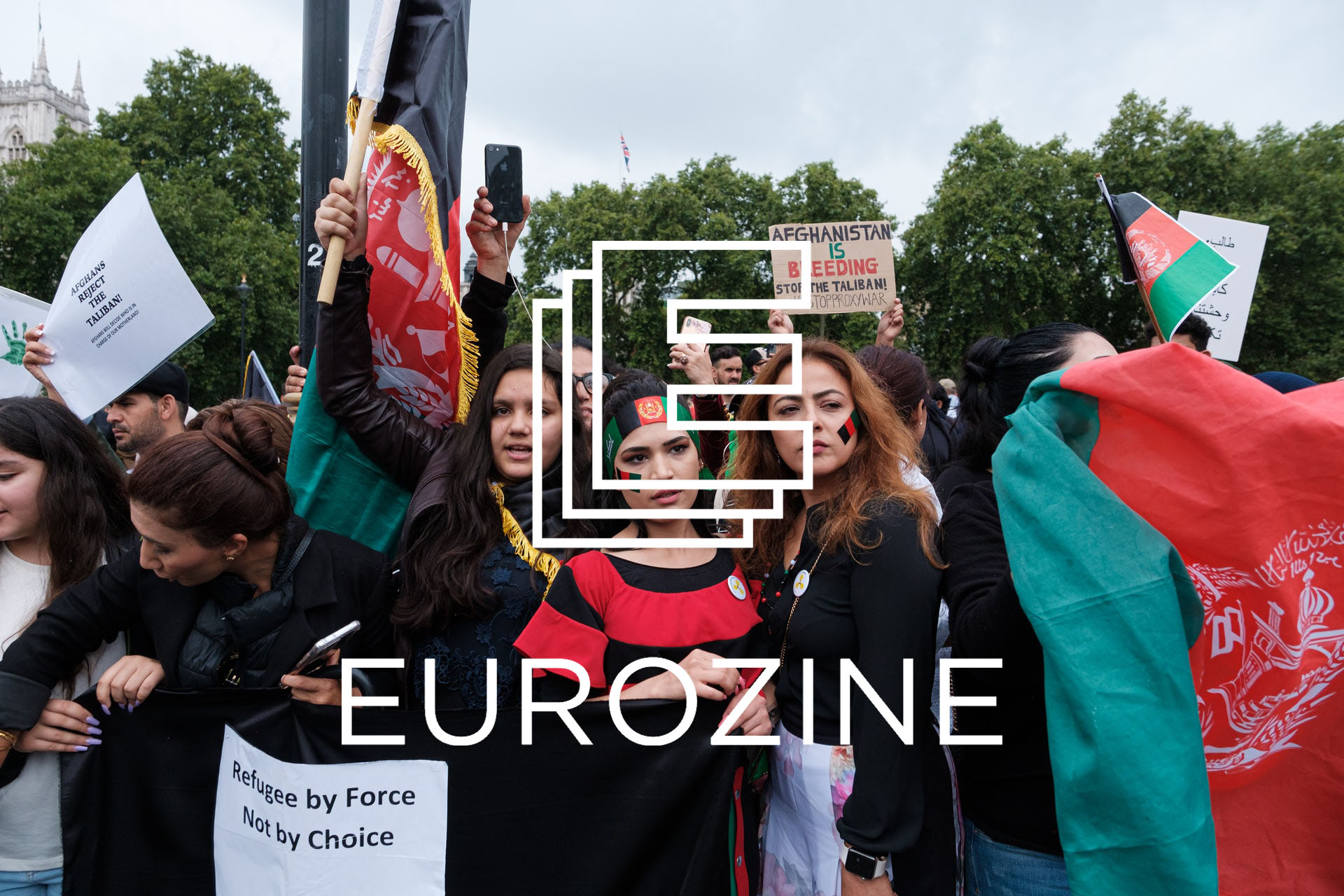 Image from a ‘Stop killing Afghans’ protest in London, UK in August 2021. Photo by Ehimetalor Akhere Unuabona from Unsplash.

The power of words

In The right word from Glänta’s toolbox series, philosopher Michael Azar begins with a quote from André Breton: ‘A word, and everything is saved. A word, and all is lost.’

The text goes on to explore not only the dilemma writers face when choosing words but also the mix of ardour and suspicion they feel for their seductive power. Starting with literature, Azar presents Miguel de Cervantes’ and Gustav Flaubert’s explorations of ‘the relationship between lived reality and idealistic dreams, focusing on the friction at the meeting point between the harsh facts of reality and the dreams we indulge to escape from those facts.’

Madame Bovary, he suggests, questions ‘how deep into the land of dreams a person can venture before she loses touch with reality’ and Don Quixote ‘from whence comes the power that convinces a person to battle windmills, thinking them evil giants?’

From philosophy, Azar chooses Plato’s argument with Gorgias and other Sophists who believed that words can ‘both instil and alleviate fear, … inspire both tears and laughter, promote both love and hatred’. Instead, in The Republic Plato ‘debates in what situations a person has the right to employ the word’. He ‘puts forth a philosophy of the word as intended to “enlighten” the listener or reader about the right, the true, the beautiful.’

And what of those situations when the truly oppressed use words to overcome the privileged and powerful? Casper Andersen’s article A pencil for your land describes the approaches writers Chinua Achebe and Ngũgĩ wa Thiong’o found to turn their colonial British public school education to their advantage.

Andersen recounts: ‘One evening in 1957, the school debating society was arguing for or against the statement “western education has done more harm than good in Africa”. Ngũgĩ describes how he became involved in the heated discussion: “I told a story. A person comes to your house. He takes your land. In exchange, he gives you a pencil. Is this a fair exchange? I would rather he kept his pencil and I kept my land.”’

But once that pencil is in your hand, it can become an exacting literary tool: ‘The lesson he learned’, writes Andersen, ‘was the awareness of the power of a well-chosen analogy to illuminate and criticize colonialism’s complex relationships.’

Words of a protest

Right now, the freedom of expression of Afghan women is under threat. While promises are currently being made to continue providing education for women, for example, the segregation of female students and tutors, and restrictions on subjects studied, will seriously limit classes. Despite the recent show of women in burkas filling an auditorium at Kabul University’s education centre seemingly of their own accord, the scope of what is deemed appropriate for Afghan women to learn and how they interact is now being dictated to them. After having lived with fewer restrictions, women are now facing the very real prospect of gender apartheid under the Taliban.

#DoNotTouchMyClothes is a very direct and immediate action in response to this oppression. The hashtag statement, accompanied by images of women proudly wearing their vibrant, traditional clothing, each piece as individual and unique as the woman wearing it, is disarming. As an imperative counter to a directive it stands out and, although not explicit, stands in for other demands: do not touch my education, my free movement, let alone adolescent girls.

There’s much written about a war having just been won or lost. But what, as Breton would have it, has been saved or lost? Afghan women and girls are more than losing their right to study freely. They are having it taken away from them. It’s going to take extraordinary means for them to save the word, their access to self-expression.

This editorial is part of our 15/2021 newsletter. Subscribe to get the weekly updates about our latest publications and reviews of our partner journals.