Not just to build

In eastern central Europe, the neoliberal “regime architecture” favoured by non-state actors is copied by the public sector, resulting in buildings with no representative function. To counter this trend, architects must serve as ambassadors of architecture and quality space.

Personally, I think we need the idea of Central Europe as a platform for opposing the nation states that have been established in the region over the past two centuries. Amongst other things, the rise of democratic regimes during the last two decades has allowed the ideology of “one nation, one state” to triumph, resulting in various monolithic nations. The final steps in this two-century-long march were marked by the disintegration of Czechoslovakia and Yugoslavia. If we understand the nation state as the last stage in any national movement, there is simply nowhere to go beyond the mono-national horizon. Any attempts to go further might therefore risk a regional collapse, sending us all back into the arms of totalitarianism. With this in mind, I understand the idea of Central Europe as a concentration of positive common experiences from the region. Central Europeanism should not be seen as a political project, enhancing economic growth and prosperity – it is a purely cultural project. Also, it shouldn’t be taken as the opportunity to create a governance structure parallel to that of the European Union. That having been said, there is a pressing need to develop a local variant of Europeanism – a kind of localism that escapes nationalist, xenophobic or anti-European thought. In this way, the Central European idea might be understood as an intermediary step away from nationalism towards Europeanism.

At this point, a logical and perfectly obvious question comes to mind: why not turn directly to Europeanism? Differentiating this region from its western counterpart is primarily the short time span in which new elites emerged after 1989. The fact that new laws emerged simultaneously with these political elites is neither surprising nor particularly problematic. More troublesome is the equally rapid rise of economic elites, who had little time to ripen. This is not the place to analyse the means by which these elites emerged: restitution schemes, the legalization of dirty money from the communist apparatus, etc. For our purposes, the pertinent fact is that the process was very rapid. It is this fact that separates our elites from those in the West.

We leapt from the reign of false collectivity, dominant until the 1980s, into a society governed by the neoliberal ideology adopted by our newly minted elites. Driven by confidence in permanent economic growth based on cheap labour and new markets, Central Europe joined the European Union and NATO. Nevertheless, our elites failed to properly explain the European project to the citizens. Moreover, they understood themselves simply as economic elites, neglecting their potential as cultural and intellectual leaders.

Ideas about community in the EU are promoted by PR agencies, but the extraordinary opportunity to debate our common future has been missed. The EU has been promoted as an economic project rather than as a cultural mission. Therefore, one of the potential strengths of the Central European idea might rest in bridging the divide between belonging to the EU and global markets and taking responsibility based on shared values1 – a crucial point in contemporary Central European thinking and activism. In large part, the identity of Central Europe has been forged through the experience of being an insignificant economic and political force, unlike western European or Mediterranean powers in previous epochs. This experience on the peripheries has made the region averse to extremism. All of which doesn’t mean that extremism hasn’t made occasional appearances, but I strongly believe that it’s not part of the shared experience of the region. The largely bloodless Central European revolutions of 1989 expanded the very definition of revolution to more broadly include non-violent action.

There’s an absence of celebrity architects or shared architectural values in Central Europe. The architectural profession is by nature tied to the regime. If you design and build public buildings, it’s very hard to convince the public that you are not a regime architect. This is clearly at work in our understanding of the Central European architecture of the 1970s and 80s. For instance, Karel Prager’s work in Czechoslovakia is considered regime architecture, even though he was never a member of the communist party. Today it’s simply impossible to imagine that someone received parliamentary commissions in Prague2 without being a member of the communist party. Other iconic pieces in the region have also automatically been deemed regime architecture, including Cankarjev dom, Edo Ravnikar’s cultural centre completed in 1982, and the Building of Slovak Radio, designed by Stefan Svetko, Stefan Durkovic and Barnabás Kissling and completed in 1983.

By contrast, designating contemporary works such as Josef Pleskot’s CSOB Bank in Prague or CoopHimmelb(l)au’s UFA Cinema Centre in Dresden as “regime architecture” seems insulting, both to the architects and investors. Proof of the “non-regime” status of such work might reside in the fact that corporations have commissioned them, rather than states. But in a global market where some companies control more capital that many sovereign states, it should be relatively uncontroversial to extend the contemporary designation of “regime” to non-state actors. Today, companies concentrate power and create regimes. The CSOB Bank has been praised as excellent architecture – architecture responsible for changing the hierarchy of the bank. Upper management is not located on higher floors that provide the best views. There are huge courtyards where people can meet, and greenery on the roof serves as a resting space for employees. Yet it is a gated community within the city fabric. The UFA Cinema Centre is a spectacular monument, in which architects have made use of the striking language developed in the early works of Wolf Prix. Here, the architects used wealthy neoliberal society to materialize their dreams. Even critical comments by Wolf Prix about the limitations of neoliberalism doesn’t free his architecture from its regime associations. 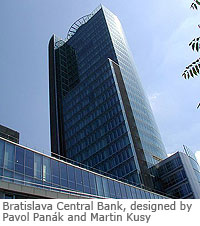 Paradoxically, contemporary public buildings in Central Europe often lack any regime connotations. This is likely the result of the weaker position of public investors. Public buildings are created using the same architectural language as banks and shopping malls. Eric van Egaraat’s new city hall in Budapest and the Slovak National Bank tower by Pavol Panák and Martin Kusy both use the language of commercial development, thereby removing the representative roles of the institutions in question. Then there’s an entire category of public building that has rejected the architectural profession and just follows the lowest price. An example of this thinking can be seen in the Justice Complex in Brno, where even the authorship of the design is unclear. These kinds of public buildings, lacking spatial qualities, are unfortunately quite common throughout Central Europe.

However, there are good examples of public investment in individual projects in smaller cities, especially where politicians were interested in leaving a positive legacy for future inhabitants. Litomysl in the Czech Republic is one of the best-known examples in the region. But these projects require political representatives who are enlightened and willing to risk the support of the public in order to create quality. It’s necessary to convince the public that investment in public space and public buildings makes sense, even though they are not profitable on a short-term basis. This is precisely why architects must also act as public intellectuals, serving as ambassadors of architecture and quality space. But this educational dimension requires more than just new buildings. It requires public debates, initiatives and criticism. In conjunction with high quality architecture, these activities will make it possible to reject regime architecture.

My first response as to how architects might avoid regime association came in 2002, from a project called “Shared Awareness”. A wealthy investor had asked us to turn an existing structure from the early 1990s into his new home. After a year of debates focused on how to make the strongest impact on the surrounding neighbourhood, we eventually convinced the client to demolish the structure and return the plot to nature. The investor invited a building company, the structure was demolished and what remained was taken to the dump. Today, some nine years later, the plot remains undeveloped.

How architects ought to act in order to be more than tools of a regime is a universal question. The answer seems to be much easier than the question. They should simply behave like public intellectuals, connecting their work to their public activities. Perhaps the best-known architect working in this spirit is Rem Koolhaas, who plays the triple roles of architect, teacher and public intellectual. His role as an architect and designer can easily be documented through his projects and their realizations, and the same goes for his teaching activities. But his role as a public intellectual is harder to track and requires that we go beyond the scale of a particular building or even region. This is because the role of a public intellectual is to be critical of commonly accepted visions of the present and future and to develop alternatives, or conversely to accept common visions of the present and future and to declare this acceptance openly.

Miroslav Masák from the Czech Republic serves as an example of a recent non-regime architect. His work is not just design. Principally, it’s the product of a public thinker. His work on the department store Máj was initiated by the regime in order to enlarge the shopping network in Prague. Even though it was a regime commission, the architects involved implemented an open plan and vertical circulation that was exposed to the exterior. Moreover, allusions to the Centre Pompidou could clearly be interpreted as anti-regime statements. But what lifts Masák’s work above of simple regime labour is his activity as a public thinker, particularly his projects undertaken with Jirí Vozenilek, the father of prefabricated housing in Czechoslovakia. Additionally, his activism in promoting good architecture during the period of normalization and his dissident activities in Václav Havel’s circle raise his work above the low standards of the regime. Public intellectuals should not simply be thinkers participating in panel discussions and debates. They should go beyond this passive role, actively commenting on mistakes made by the elites and offering solutions. This should be the groundwork for any contemporary architectural practice.

See my Beyond Everydayness: Theatre Architecture in Central Europe, The National Theatre, Prague 2010.

The commission from the Czechoslovak Parliament came from an architectural competition held in 1966.

When knowledge is deracinated

As local journalism disappears, polls replace knowledge about communities. Is this one reason why politics seems increasingly unpredictable? Also: why subscription content is making a comeback in central eastern Europe – and what that might mean for cultures of impartiality.