We moved office last week to a better suited and more affordable location in Vienna. It was a rushed business, as most things are for our colleagues recently. We knew in advance that packing the journal archive of 20+ years would be a taxing job.

Senior editor Simon Garnett tackled a good part of this task. The rest of us were left to comprehend the remainder – literally tons of physical memory of a good 15 years that Eurozine resided at Dürergasse. Most of us had worked only a few years at the old office – myself less than four – and yet, the cultural memory of such an organization and its almost 40 years of history lingers.

Eurozine, the network of cultural journals, started out as informal meetings between editors from both sides of the Iron Curtain in 1983. In 1998 the web magazine was founded to provide an overview of European cultural publishing. The office had been inhabited by Eurozine since 2007.

We spent a couple of evenings and weekends carrying 15+ kilo piles of unidentified artefacts and old printers, fixing overloaded boxes and visiting Vienna’s iconic Misplätze – the incredibly organized waste management sites, where you can hand over still useable furniture and books, and properly dispose of toxic waste. On the way out, you can even pick up some fresh compost!

While handing over her spreadsheets, our departing project manager Judit Csikós also took apart a bunch of tables and methodically sorted documents which nobody had touched for years. She moved mountains both figuratively and literally.

Heart and soul of the office, communication manager Anna Klein packed and organized like a lightning strike – she also labelled like a pro. 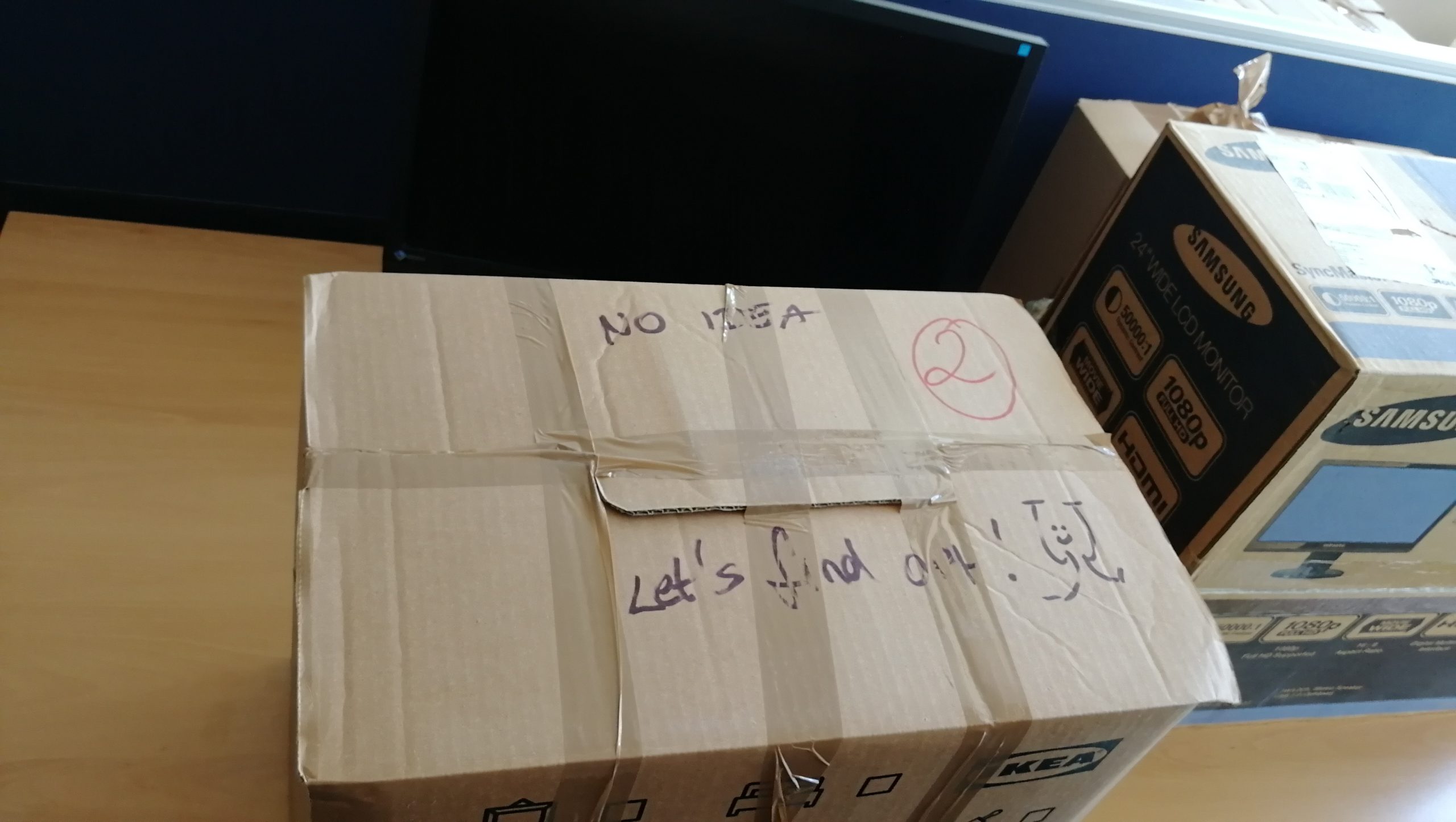 During long hours of packing up the old office, Anna Klein sometimes lost track of what had been put in each box… and wasn’t shy to let us know. Photo courtesy of Dóra Papp.

Editor Sarah Waring proved great at handling boxes with a moving trolley. Trained on apple buckets and 50-kilo bags of corn on my grandparents’ farm, I stuck to what I know best: low-altitude powerlifting. On the first day of shipping, the professional movers were upset at the sight of us, office-ridden intellectual women carrying heavy boxes. After 10 hours of non-stop work, they admitted they probably needed our involvement after all.

We were happy to get rid of cubic metres of old paper and appliances but had to negotiate every decision about what to keep and what to let go of – to make space for some renewal yet preserve the connections amassed here.

It was also an archive of rapid changes in technology since Eurozine first furbished its premises. We found old computers still running, and old-school software packages – on CDs accompanied by inch-thick manuals. I even stumbled across a folder of comments from the website, printed and carefully filed, testifying to the dedication of our magazine’s readership in 2009.

My favourite was a hilariously angry complaint from a Swedish reader upset by the faulty transliteration of Ancient Greek expressions into English. ‘I don’t even know which language to write in…’ he started, proceeding to mercilessly roast the editors who came before me. It’s comforting to see that they got things wrong, too. 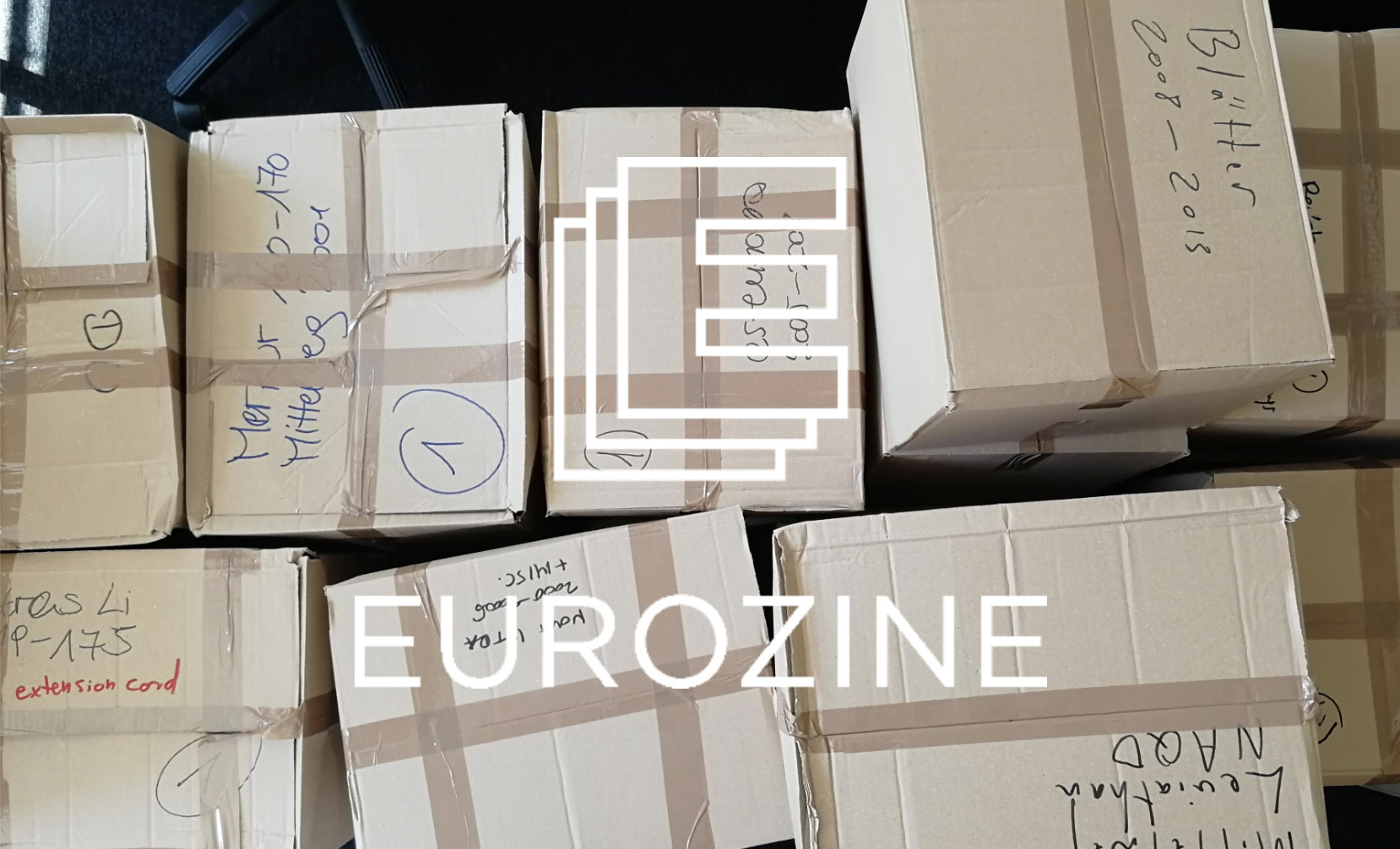 Eurozine partner journals shipped to their new home, waiting to be unpacked and displayed again. Photo courtesy of Dóra Papp.

When I first came to Eurozine, I was intimidated by the authority the organization projected. I had also never seen a magazine before that openly advertized the position of editor-in-chief. It was completely foreign to me – and I was completely foreign in Vienna, too. And yet, I fell in love with both very quickly. Upon receiving the news that I had got the job, I ran to a mall and bought a discount string of pearls, as one of my female professors had instructed me to do: ‘You need certain tricks to be taken seriously!’

Living in Budapest and commuting to Vienna, I spent countless dawns curled up on trains and bus seats, to only then change into my authoritative apparel at the neighbourhood park surrounding the famed aquarium Haus des Meeres (Sea House). A couple of local punks recognized me after a while and cheered for me on dark winter mornings.

It took me a while to realize that I could be less restrained in my appearance. It turned out that the authority of this organization lies not in some rigid manners but in the dedication and mutual support of the team and expansive network of editors from more than 90 journals and magazines throughout Europe. This solidarity has gotten us through two pandemic years, allowed the magazine to expand and reach a wider audience, and we could even support our partners in Belarus, Ukraine and elsewhere through this professional infrastructure. 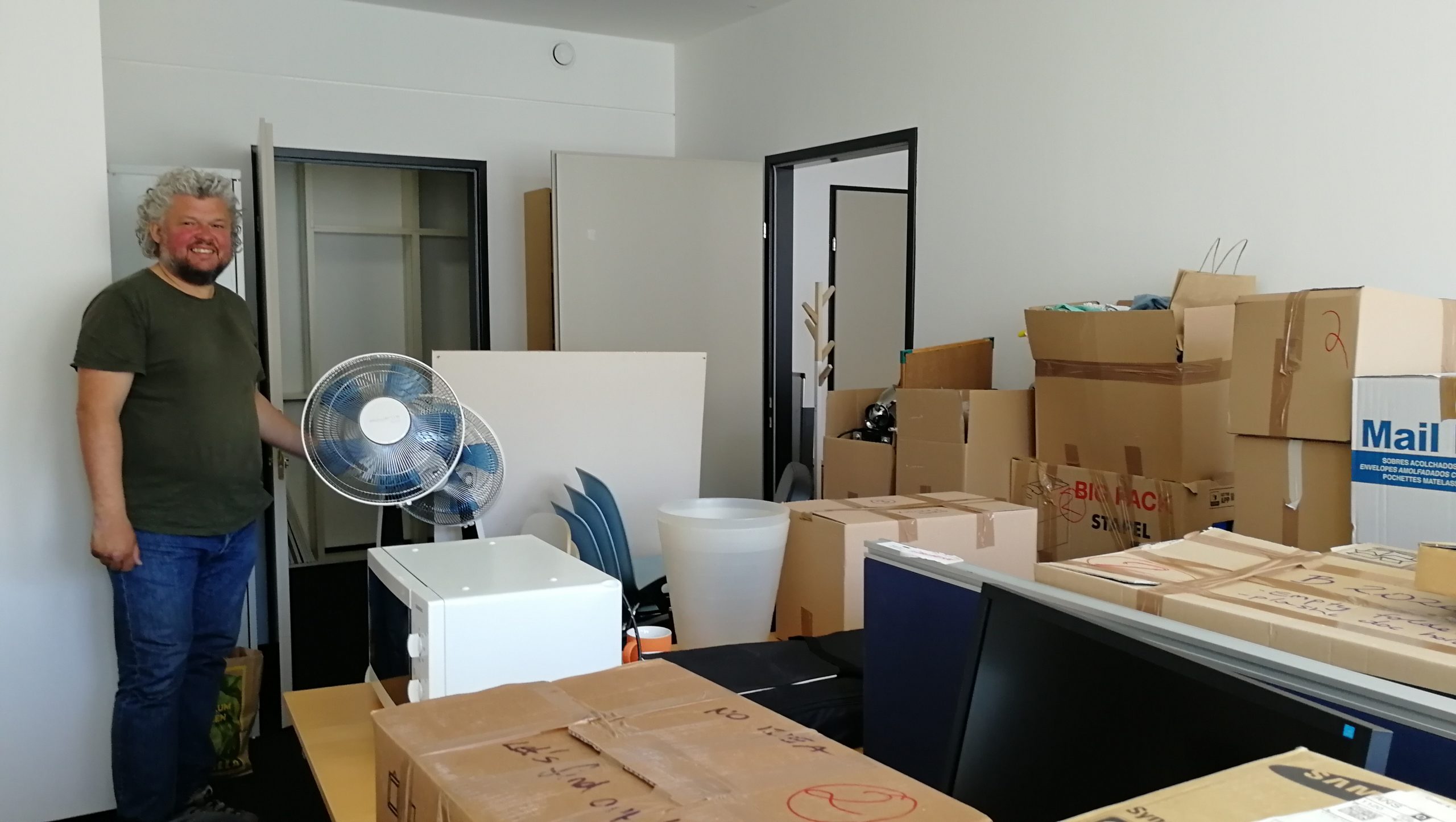 Newly minted managing director Hermann Riessner knows the task he’s taken up: he joined Eurozine as of May 2022 and is determined to stabilize operations. Photo courtesy of Dóra Papp.

Admittedly, Eurozine is facing exceptional hardship right now. A not-for-profit operation, we have long financed our work based on cultural grants, which have plummeted due to the pandemic, inflation and, of course, the war in Ukraine that rightfully demands focus. Although our readership has grown significantly, our funding hasn’t.

We need to accommodate the major changes in how culture and publishing are financed – most of which are, unfortunately, here to stay. We’ve had to cut some necessary corners and staff hours, just so we can maintain our publishing. Moving the office is also for the sake of longevity. But in the current situation, it may well be a hibernation plan.

We have very little time to raise funding for the last quarter of 2022: with our current budget, we will have to cease operations by the end of September. So now, after publishing for free for almost 25 years, we turn to you, our readers to help us maintain our publishing and the professional exchange behind it.

From now on, you’ll see our plea more often, asking readers to get involved and invest in the survival of our magazine. Our immediate goal is to raise at least 10 thousand euros in small donations, while we cover the rest of our budget gap via traditional avenues of funding. In the longer run, our ambition is to be able to rely on our audience in a much higher proportion, which would secure our independence, and thus the quality of the content we are offering you.

Together with you, we could use this moment as a turning point. Your investment can bring about a renewal, and a steadier operating model for at least another 25 years of free and independent publishing.