New Eastern Europe features Polish and Ukrainian commentary on the Russian attack on Ukraine. The issue went to press in late January, as the military build-up on the Ukraine border was taking place. ‘While security and geopolitics is right now at the top of the agenda,’ write the editors, ‘other types of instability also remain, including political, economic and social. … Should war escalate again in Ukraine, how will the instability further deteriorate? And how far is the Kremlin willing to go in order to achieve its aims?’ 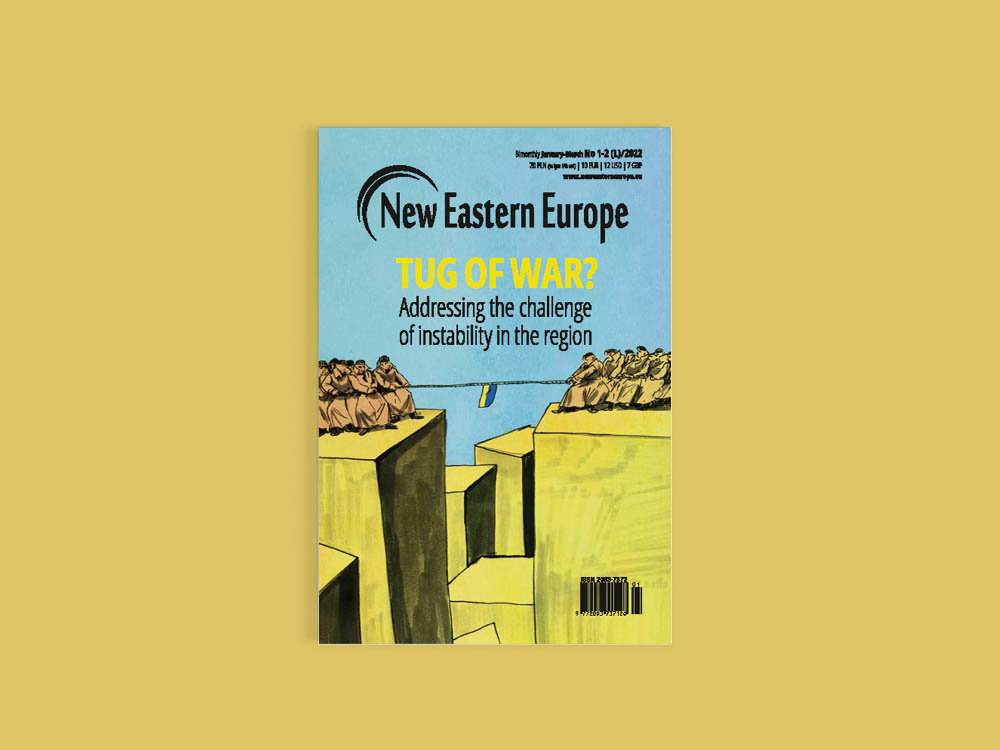 According to Polish security analyst Agnieszka Bryc, Putin’s intention is not to restore the USSR, although that is what he would like the West to believe. Beyond the threat of force as tool of diplomacy, the Cold War analogies encouraged by Russia only serve to gain attention. In reality, it is increasingly difficult for the Kremlin to maintain its influence in the post-Soviet space: ‘Moscow’s problem is that many post-Soviet states over the last three decades have managed to learn how to organise a sovereign foreign policy, gain non-Russian partners and, above all, rediscover their own national identity.’

In the recent conflict with Moldova’s pro-western government over Gazprom price hikes, which Moldova was eventually obliged to swallow, the Kremlin above all wanted to send a message, writes Bryc: ‘that leaving Russia’s grip will be neither easy nor cheap’. Whatever the causes of the Kazakhstan protests, what mattered to Russia was to demonstrate it remains the guarantor of security and order in the former Soviet space.

‘Playing on western weaknesses – lack of inner cohesion, slow reactions and a preference for dialogue provide the Kremlin with a vital chance to play the game effectively. Putin knows that raising the geopolitical stakes is enough for the West, scared of escalation, to do everything to prevent conflict. In order to succeed, Putin must simply convince the West that today’s Russia is the USSR 2.0.’

The Ukrainian case for NATO membership

Hanna Hopko, former Ukrainian MP for the post-Maidan Self-Reliance party and later independent, makes the case for NATO membership for Ukraine and says that Ukraine can even turn the tables on Russia. ‘As one of the initiators of the Verkhovna Rada’s 2019 “Resolution on the Protection of the Rights of Indigenous Peoples of the Russian Federation”, I believe that Ukraine’s current position will ultimately help transform Russia and curb the expansion of authoritarian regimes,’ she writes.

‘After all, Ukraine has borne the brunt of various international issues Europe has been facing for centuries. The future of the continent subsequently lies in Ukraine. From fighting off invasions to curbing authoritarian regimes in the 21st century, Ukraine’s position on the European continent has remained the same. However, it is unclear if Europe truly understands these experiences.’

Whether or not one agrees that Ukraine, as Hopko writes, has a ‘special mission to revive Christian values in Europe’, it is certainly true that Europe is now confronted with the failure of its policies towards Russia. This goes particularly for Germany.

Misguided German Ostpolitik carries a heavy portion of the blame for the Russian invasion of Ukraine in 2014, writes Andreas Umland. Failure to sanction Russia for its interventions in Transnistria in 2001 and in Georgia in 2008, together with the launch of North Stream 1 in 2012, signalled to the Kremlin that German economic interests overrode its concerns for the security of post-Soviet states. Inexplicably, the Merkel government continued the course established under Schröder even after the annexation of Crimea in 2014, launching Nord Stream 2 the following year.

‘The relative gain in national security from the Nord Stream projects is small for Germany, a NATO state located far away from Russia,’ writes Umland. ‘In contrast, the equivalent reduction of Russia’s dependence on its former colony and neighbour state Ukraine proved fatal for the integrity of the latter. The all-European loss of stability due to Moscow’s annexation of Crimea and the intervention in Donbas in spring 2014 far exceeds the marginal security gains for the EU from the completion of the first Nord Stream pipeline.’

Berlin’s faith in the normative spillover effects of economic rapprochement with Russia proved blind. Despite Merkel’s obvious disappointment with Putin, she was ‘unable or unwilling to make the long overdue shift in German Ostpolitik. Instead, Berlin’s mode of behaviour toward Russia’s authoritarian regime remained and remains characterized by the fateful decisions of a man who is a political friend of Putin and has been an employee of the Russian state since 2005.’