The Boston bombing and why you can't become completely American

George Blecher pinpoints exactly what it is that confuses Americans about the actions of Dzhokhar Tsarnaev, who, prior to the bombing of the Boston Marathon, may not have been far off from becoming an ideal American. But then becoming completely American always was a fiction.

Most of the police action around the Boston Marathon bombing followed a familiar scenario, including things that a few decades ago would have made us cringe: cameras, both institutional and private, recording our every move; police and other authorities literally shutting down a major city in a matter of minutes; glaring information gaps that never get filled in as new events compete for media space and eliminate the possibilities for nuance and detail: What about that third bomb? What about the younger brother’s self-inflicted wound when he was hiding in the boat? 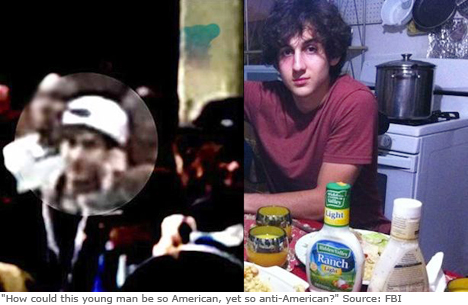 To say that we have become numb or bored with terrorist acts doesn’t quite capture the complexity of our feelings. Since the Kennedy assassination and on to 9/11, TV has developed a formula to report national manhunts – talking heads, lightning-quick transitions, interspersed interviews and updates, endless repetition of film footage, etc. The formula is so familiar that by now, watching these events feels addictive and vaguely pornographic. We stay glued to the TV not only because we are interested but because the repetition of the form itself gets us high, gives us an adrenaline rush.

The most interesting aspect of the Boston Marathon bombing was the part that reached past the formula into what Peter Handke once called “a moment of true feeling” – the outpouring of sympathy/empathy for Dzhokhar, the surviving Tsarnaev brother. It was remarkable and unexpected, but in a quiet way. A real breaking of the form.

The first wave of feeling came from Dzhokhar’s high school and college buddies, whose fondness for him seemed completely genuine. They described him as a good friend, a sociable person, a participant in all their activities; one friend kept using the word “alleged” to underline the fact that he was innocent until proven guilty. Then the media ran Dzhokhar’s tweets, which were slangy, relaxed, and funny, and the public grew even more confused: how could this young man be so American, yet so anti-American? Photos of Dzhokhar followed. He was just a kid! He looked 12, not 19! Everybody knew someone like him – a cute boy with attitude who smoked dope, kidded around, and was charming enough to bring tears to the eyes of both girls and boys.

When the manhunt started in earnest, there was a further round of sympathy. A classic American myth was being acted out right before our eyes – the lone fugitive/cowboy chased down by the Authorities, the noose tightening around his neck with every passing hour. As the story shifted focus to the troubled older brother Tamerlane and the angry mother, Dzhokhar won us over in yet another way; now he was seen by many as the innocent victim of family pressures. Part of us wanted so hard to believe that he didn’t really mean it, and that his filial loyalty was even admirable.

As of this writing, there hasn’t been much fresh news, and other, more immediate headlines are pushing the Boston Marathon bombing out of our consciousness. But if nothing else, the incident shines a light on a sentimental streak in the American character that to Europeans may seem either naive or touching, depending on how you are feeling that day about the States.

Actions like Dzhokhar Tsarnaev’s confuse Americans a lot. He fit in, he became one of us. From his participation in high school sports to his iPhone and tweets, he followed a pattern that was taking him along the way to becoming an ideal American – the Tom Sawyer route, the rebellious kid who eventually becomes a pillar of society. So how could he betray us? How could he be so disloyal?

What we really learned from the Boston Marathon bombing was that more ancient loyalties were churning inside this young man, and that they touched him on a level far deeper than where iPhones and tweets can possibly reach. In a country whose citizens often refuse to see that they are links in a chain reaching back to prehistory, this event showed that Dzhokhar was ineluctably connected to family and clan; and that no matter how much we like to think otherwise, it has always been a fiction to believe that one can become completely American.