Thousands of Europeans die annually waiting for a new kidney, heart or liver. At the same time, the black-market trade in organs is thriving, as a recent scandal in Germany has shown. So should organ trading be legalized? Slavenka Drakulic, herself a two-time kidney transplant patient, argues the pros and cons.

That morning, a telephone call cut my life in half – into a life before the kidney transplant and a life after it. It was 16 February 1986, a cold and stormy day, when the call from Boston’s New England Deaconess Hospital came through. I was 37 years old, divorced, with a teenage daughter. I was living in Yugoslavia and after six years of surviving on a haemodialysis machine, connected to it for four hours every second day, I had been wondering if there would ever be a transplant.

Eighteen years later, in 2004, I got another call, this time from Rhode Island Hospital. After the rejection of the first kidney and another four years of waiting on machines – another chance! And a very special one at that: this time I was to receive a kidney from an altruistic, non-related, living donor.

I was shocked when I heard that. An unknown person who gives away her kidney to a stranger! How is that possible? Later, after the surgery, I met my donor Christine Swenson, a young nurse and mother of two. I asked her what her motivation was. Christine replied that she had no particular reason except the wish to help. People tend to assume almost automatically that such an act of extreme goodness must be motivated by money – or religious beliefs. Neither applied in Christine’s case. Having written a book about people like Christine, I know that they are ordinary people and that is precisely why their gifts are so precious. 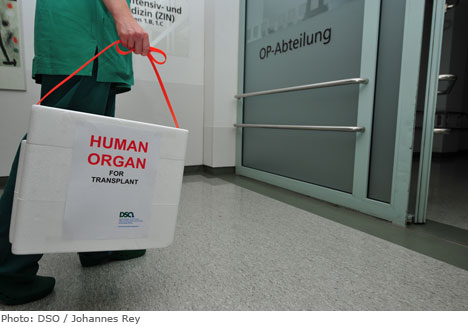 Why aren’t there enough organs to meet the need for transplants? Why are people sentenced to premature death because they have to wait too long? In Germany, a recent scandal involving manipulated medical records revealed the extent of the illegal trade in kidneys and other organs. As a story in Der Spiegel showed, both the seller and the buyer of the kidney can be regarded as victims. A Russian immigrant in Israel, Vera Shevdko, sold her kidney for 8100 euros to an elderly German man named Walter. Vera is a victim of poverty with whom it is easy to sympathize. Yet Walter, the buyer, is also a victim: a victim of an inefficient health system. If you are told that you have only a few months to live if you don’t get a transplant – and you don’t have any chance of getting one – wouldn’t you look for another solution, even if it is illegal? There is not one single patient on a waiting list who has not entertained the idea of buying an organ. The tampering with waiting lists in respectable German hospitals just confirms the scope of the problem.

Europe’s compulsory health insurance system is something to be proud of. However, that doesn’t mean that it works perfectly. In Europe, healthcare is institutionalized rather than privatized. On the other hand, patients here expect much more of medical institutions than, for example, in the US. Since organs can be harvested only from a brain-dead person on a life-support machine or from a living donor, there aren’t enough organs to go around. Why, then, is there no legal market for organs? Rare cases of corruption and trafficking reveal what everybody knows: the market already exists. But it is a black market, in private hands and uncontrolled. Wouldn’t it make sense to legalize it?

I find this question legitimate. In the last decade, much has been written on the subject, especially in the US. The core of the controversy has been well described by Sally Satel, an advocate of a legalized market, a medical doctor and a transplant patient herself. Is it really more ethical, she asks, to die while waiting for an organ than to buy one? The arguments against marketing organs are well known. Above all they express concern for the poor, the most likely sellers. Pro-market advocates counter that, if controlled by the state, donors could be compensated with free education or free medical care.

Numerous websites now act as a source for people seeking organs. One such is www.matchingdonors.com – here, however, both the donor and the recipient must sign a legally binding document stipulating that no money or other benefits have been exchanged before the transplant is carried out. America is indeed different from Europe in this respect: there seems to be less suspicion there.

Would a market for organs even be possible within Europe’s socialized healthcare system? The European system is devised to benefit everyone equally, not only those with money; this principle is what makes it a just one. To introduce money into this kind of system would run counter to the humanistic tradition and ideals that distinguish Europe from other parts of the world.

However, the price is high. In Germany alone, almost three thousand people die every year waiting for a transplant. These figures show how necessary it is to introduce measures within the existing possibilities. More investment in transplant medicine will reduce the need for a black market. But this would require additional effort involving the whole of society. This will be impossible unless it is clear to everyone that the alternative is not only a miserable life on machines, but also the premature death of many patients. The new draft law in Germany includes two key changes: there would be no need to ask relatives of a deceased person for permission for a donation; and the waiting time for a patient would start from the first day of dialysis. If the law gets passed, it would probably shorten the waiting lists considerably. But it would also be necessary to introduce more rigorous means of control to avoid corruption. Recent scandals should set the alarm bells ringing and can serve as an argument in favour of such changes. But the influence of the pharmaceutical lobbies, which profit from the existence of expensive dialysis, ought not to be underestimated. One patient on haemodialysis costs around 80,000 euros a year – a transplant costs less than half that.

Once you have received your kidney, nobody asks what happens then. Do you live long and happily ever after? A lot of care and effort is needed to balance medication in such a way as to prevent an organ from being rejected. Here, the Germans have a remarkable record: if you do end up getting a kidney, you are pretty safe. This is no small achievement. As a patient who has had two transplants, I know this only too well.