The success of a hardline nationalist in last month’s parliamentary election in Slovenia represents another advance for the forces of illiberalism in central and southern Europe. In alliance with Hungary’s Viktor Orbán, European ‘illiberals’ are using vilification of the Other as a route to power, argues Boris Vezjak. 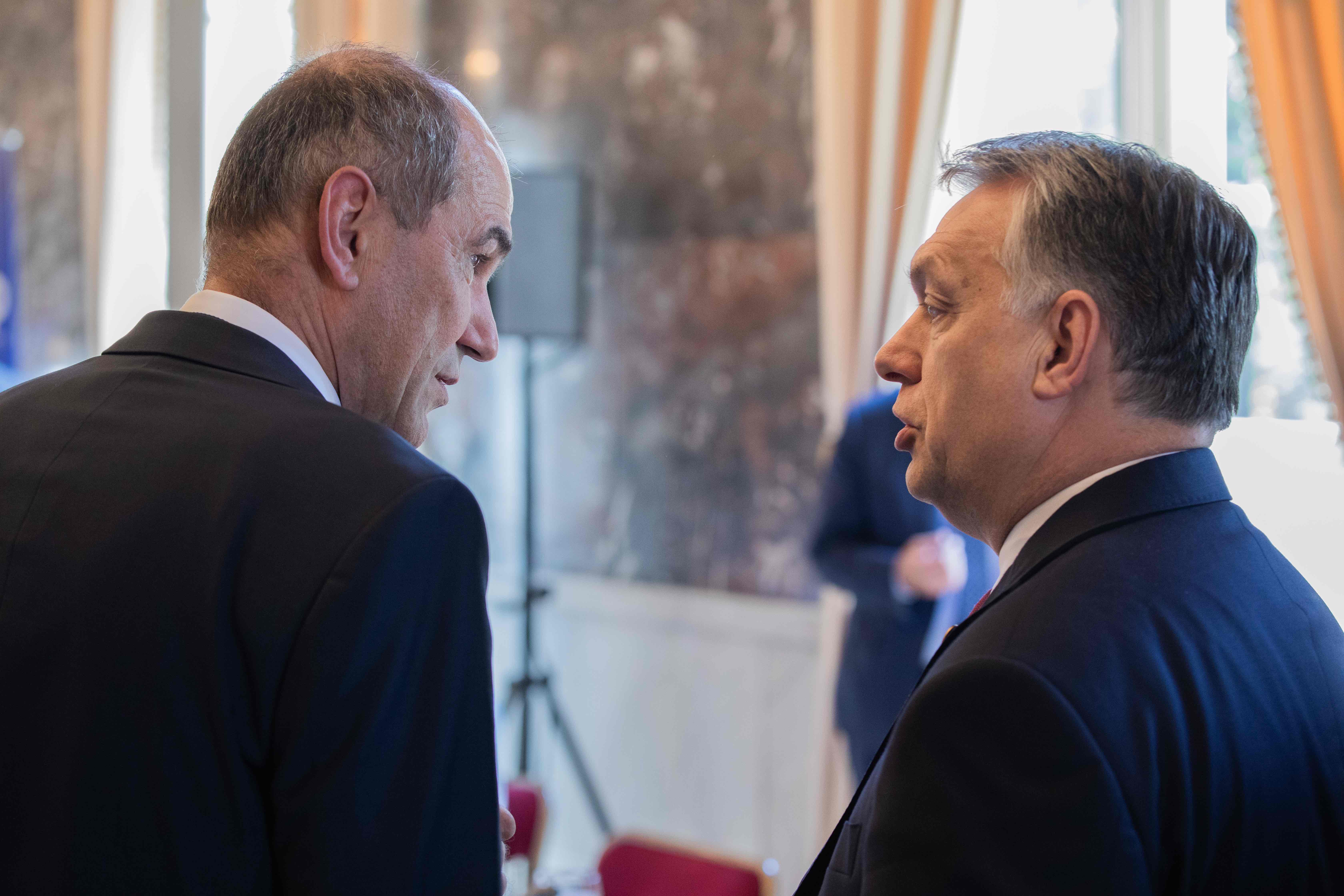 By a coincidence of electoral timetabling, Viktor Orbán (Fidesz) in Hungary and Janez Janša (SDS) in neighbouring Slovenia recently won parliamentary elections less than two months apart. The former won a massive 48-percent share of the vote and a two-thirds majority of seats in parliament in April, a success comparable to his previous landslide wins in 2010 and 2014. The latter came first in the Slovenian elections on June 3, securing 25 percent of the vote, double the support of the second-placed party. In his 25-year political career, Janša has headed the government twice; at the end of his most recent stint, the leader of the SDS resigned after street demonstrations were sparked by charges from the official anti-corruption body that he had failed to properly report his assets .

Janša entered prison that same year, to begin serving a two-year sentence for accepting bribes during a military procurement deal. A few weeks later his party, the SDS, won 20.7 percent of the vote. The Constitutional Court later overturned his conviction, prompting Janša to allege electoral fraud and demand compensation from the government. Despite his victory last month, Janša is struggling to form a government due to a lack of coalition parties. But something else is rather more important: Orbán and Janša are long-standing political friends and kindred spirits. When the two of them met a few months ago with Nikola Gruevski, Macedonia’s nationalist ex-president, just as local elections were being held in Macedonia, the trio mainly discussed how to close down the Balkan migration route. A consistent anti-refugee policy and rhetoric of fear is the strongest dimension of this new political orientation – and public opinion polls, as well as election results, mostly indicate that the strategy is proving effective. In other words, if there were no refugees, such politicians would need to invent them.

It is not just that Orbán needs allies in the Balkans and nearby; these allies also need him. In particular, they need his money. By European standards, Slovenia and Macedonia are relatively small, but they nonetheless represent important allies for Orbán, fortresses from which to spread his ideological influence at a time when the Hungarian prime minister is more often than not criticized in the European Union as a nascent dictator. It was no great surprise when Janša, speaking on TV Slovenia, acknowledged that capital supplied by Orbán’s friends indirectly financed some of his domestic media outlets, and indirectly his campaign as well. According to reports, he received at least 2.2 million euros. The media outlets Demokracija, Reporter, Nova24TV and Škandal as well as numerous others have become a serious problem in Slovenia because of their political propaganda and dissemination of hate, but journalists more widely have demonstrated a singular lack of will by failing to condemn the completely open party-politicization of the media landscape, much less trying to stop it.

Orbán, Janša and Gruevski – the latter was sentenced in May to two years in prison for corruption, though the judgment is not yet final – augur a political trend, let’s call  Orbánization, that needs to be taken seriously. It is characterized by two elements: European nationalism in conjunction with ‘illiberal democracy’, a phrase coined by American political commentator Fareed Zakaria in a 1997 article in Foreign Affairs.1 Analysts later associated the concept of illiberal democracy primarily with Orbán’s 2014 declaration, in which he described the creation of an ‘illiberal state’ as a task of his party Fidesz, and set out a vision for that state as being to pervert the basic principles of liberalism, such as personal freedom. Although he began his political career as a liberal democrat, Orbán replaced ‘freedom’ as the central element of the organization of the state with ‘nation’. His illiberalism emphasizes in particular a strong state and national sovereignty, in which individual freedom is increasingly limited and in the end subordinated to national culture and tradition.

If this definition is accurate, then illiberalism represents a crucial aspect of Orbánization as a new political approach, one that we are also now subject to in Slovenia. In practice, political dissenters will not be locked up, but there will be no political support for them and no one will listen to their opinions; money for them will dry up since other, ‘national’ projects are more important, private initiative will prevail in the economy but the ‘right’ people will have priority; civil society will not be directly repressed but there will no longer be any funding for it.

We can describe illiberalism even more critically. The democrat and sociologist Bálint Magyar, a former education minister in Hungary, shows in his 2013 book Post-Communist Mafia State: The Case of Hungary (published in English translation in 2016) that since the collapse of communism in central and eastern Europe, democracy has come to be seen by some politicians as an unpredictable obstacle that needs to be removed. Instead of a normal path of democratization we increasingly witness autocracy, the undermining of principles through a system of nepotism, and mafia activity, in which corruption Is normalized. In Hungary’s case this approach was successful because it became ‘illiberal’ after joining the European Union, i.e. after accepting the principles of democratic democracy, which distinguish it, like Slovenia, from other countries in the region such as Russia, Azerbaijan or the central Asian states of the former Soviet Union. In these other countries democracy did not develop further and either oligarchs jostled their way to power or communist rulers were replaced directly by corrupt cliques. The step towards authoritarianism is harder to understand when there has been a prior path towards democratization, especially in view of the anti-communist emphasis that is so characteristic of both Orbán and Janša.

The successful radicalization of the right, which in the case of Hungary is not only xenophobic but also anti-Roma and anti-Semitic, is no coincidence. The right in the European Parliament, governed today by the classic Christian and conservative line of the largest political grouping, the centre-right European People’s Party (EPP), provides the anti-refugee agenda with complete legitimization. Economist Ricardo Hausmann has indirectly warned of what that can mean: just as illiberal democracy fails to respect civil rights and regards civil society organizations with disdain, so its opposite, ‘undemocratic liberalism’, as described by Harvard political scientist Yascha Mounk, leaves safeguarding of rights and legal equality dependent not on the national government but on policies at the level of political structures and bodies ‘from above’, for instance the European Commission or the central bank. In this way, we arrive at the findings of Steven Levitsky and Daniel Ziblatt in their new book How Democracies Die (2018), if we analyse the causes of their actual or possible collapse in countries such as Hungary, Poland, Turkey, and also Italy and Germany, to list a few of those closest to us. Everything indicates that Slovenia also belongs on this map.

Slovenia’s June parliamentary elections were won by means of the xenophobia, Islamophobia and hate speech that characterized the campaign. To these can be added sympathies, expressed openly, with neo-Nazism, homophobia, and the support provided by SDS president Janša and his candidates for the pan-European far-right youth movement Generation Identity. The refugee has become the central and most attractive figure for fanning fear, as in Hungary. Although the number of refugees in Slovenia is insignificant and tales of a newly established refugee route are at best exaggerated, the refugee, using the old recipe of the psychopolitics of hatred, has become the Jew of the modern era, the threatening Other, represented as some sort of external intruder trying to steal away Slovene-hood but at the same time also Europe: one who threatens us both culturally and financially.

Illiberal democracy is not an especially new anomaly of European democracies. In an increasingly open manner, it calls to mind the now oft-perceived and barely disguised forms of emergent post-fascism diagnosed by Hungarian intellectual Gáspár Miklos Támas. Such work requires willing hands; in Slovenia we know that such hands belong to Mr Janša.

This is a revised version of an editorial published in Dialogi 3-4 (2018).

Post-Socialist baggage is sometimes still blamed for Hungarians’ support for an illiberal supermajority. But can a society be expected to democratize when its social institutions have been subjected to decades of attrition?