Art in the final period

We express our understanding in concepts, but each of our concepts is an extreme simplification consisting of unrelated entities. The fact that we include them in one concept does not clarify our view of the world, but rather obscures it. This also applies to the concept of “art”.

It is estimated that five to fifteen million species of animals and plants exist on Earth at present. We do not know how many there have been since the origin of life three or four billion years ago, but it is almost certain that more than 99 per cent of species have already become extinct. Man, the animal species Homo sapiens, is one of the species that exists on Earth today. The branch that led to modern man separated from the common evolutionary line of the primates 5-6 million years ago, but it is very probable that all of us alive today are descended from a small group of people, who lived 150-180 thousand years ago on the African Savannah and gradually colonized the whole world. 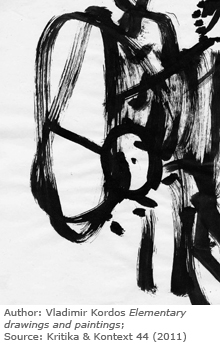 Like every other biological species, we perceive, feel and know the world around us in our species-specific way. It is more complex than that of the fruit fly or mouse, but we are still confined like them within the limits that defined the biological evolution of our species according to Darwinian natural selection. We cannot go beyond these limits. Every phenomenon around us is obviously caused by a great, even an unlimited number of factors. We are programmed by evolution to seek the causes of everything, but an individual human being is usually only capable of identifying three or four causes of any particular phenomenon or event. Our recognition of causal connections is limited by the “magic number” 3 plus or minus 1.4. This is how we explain the world around us to ourselves, but only with immense simplification. However, it is only thanks to this that we have succeeded in surviving up to now, and only because of this that we are able to act purposefully in the world, usually with the firm conviction that we know and understand it. We express our understanding in concepts, but each of our concepts is an extreme simplification. We unavoidably gather into one concept a multitude of independent entities, which are sometimes similar or related, but often have nothing in common, and the fact that we include them in one concept does not clarify our view of the world, but rather obscures it. This also applies to the concept of “art”.

The “magic three” also limits our understanding of the human being. We can name only 3-4 basic characteristics, and usually each of us differently. This is why we have stubbornly argued about the essence of the human being since time immemorial. I see the human species as differing from other species in that people are hyper-social, hyper-emotional, timid and mythophilic creatures. Obviously, this is a coarse, simplistic understanding, but it gives me a useful framework for considering the ways people understand the world, individual behaviour, social dynamics, where we came from and what does or does not await us as a biological species. These four basic characteristics determine all human needs. They are rather abstractly built into our nature, only their satisfaction gives them concrete form. The concretizing of needs and their satisfaction happens on three hierarchically organized levels (the “magic three” is not missing here either): human needs and their satisfaction are primary or biological, secondary or cultural and tertiary or transcendental. This hierarchical division was already seen by Abraham Maslow in the second half of the twentieth century. In his view, the satisfaction of lower needs is a condition for the existence and satisfaction of the higher needs.

The creations of the heterogeneous human activity we simply call “art” contribute to the satisfaction of human needs on all these levels. In the savannah it was associated with the satisfaction of primary needs. About 30-40 thousand years ago, secondary and tertiary needs emerged. Their importance increased as civilization developed. In our time this is changing, the trend is reversing: Civilization, and with it the evolutionary fate of the human species, has entered its final phase. Secondary and tertiary needs are weakening in spite of the high level of scientific knowledge and technical possibilities. It is as if humanity is returning to the level of the savannah. This has three causes. The first is a general biological factor: the evolution of every species is determined by the initial conditions, which lay permanent foundations for further evolution, but also definitively limit it and decide on the period of viability of every species. The second cause is specific to the nature of the evolution of the species Homo sapiens: Man is the only animal capable of self-awareness. Every individual is aware of his emotions and feels them in the form of pain or pleasure. Emotional evolution made man a uniquely hedonotrophic creature, which strives to minimize its personal pain and maximize its pleasure. Technology has given us effective contraception, and enabled us to reduce or even remove all physical and perhaps soon even psychological pain. The pursuit of pleasure changes meaningful human activities into “brief connections” without regard for whether they contribute to or harm the survival of the human species. The third cause is the market economy. After enabling a timid creature to secure its existence and satisfy all its basic biological needs, it has fully empowered human hedonotrophy. It has made works of art into consumer goods, while art as a whole has become entertainment. The vision of “amusing ourselves to death”, prophetically foreseen by Neil Postman a quarter of a century ago, is approaching ever faster.

I do not think that humanity is capable of stopping this evolutionary trend. The market economy successfully acts as a parasite on human hedonotrophy, and it is not in our power to change this fact. The great majority of timid human beings no longer have to fear the unknown forces of nature, so mythophilia is weakening. Hyper-sociality freed from mythophilia becomes “spineless over-sensitivity” (Giovanni Sartori), while hyper-emotionality acquires the malign form of a blind and unrestrainable pursuit of pleasure.

In spite of this, I see three important missions for art in the final period: Firstly, in close contact with science, to raise the level of our objective knowledge of the situation in which humanity finds itself and to reduce the social turbulence the final period brings with it; to show that the hedonistic “brief connection” is a vicious circle, from which our species as a whole cannot escape. Secondly, to help enlightened individuals to develop, cultivate and satisfy their secondary and tertiary needs. Unfortunately, this will only be a service to an insignificant minority of the whole human population that will still have these needs. Thirdly: It will increasingly fulfil the function of “music for the fireworks”, giving the final phase of the evolution of the species Homo sapiens a character of Kantian nobility, and giving its actors the modest but also proud feeling that the life of the human individual and of the whole species gains meaning and value only by being a fleeting event in the infinite time-space drama of the Universe.

Hopes and dreams of the bigger world

If art wants to intervene in politics, it must democratize. Curator and politician Veronica Kaup-Hasler talks to Slovene journal Dialogi about her experiments in participatory artistic practice, about cultural policy and the balancing of conflicting interests, and about why the politicization of cultural funding can be bad for art.