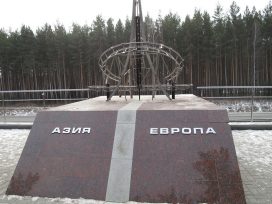 The technology of negative mobilization

How can it be that, in contrast to the international community, virtually no one in Russia believed that Russian-backed separatists shot down the Malaysian Airlines plane in July? Beyond press censorship, Lev Gudkov looks to Russians themselves, who increasingly hear only what they want to. His analysis draws extensively on research conducted by the Levada Center, presented here in numerous tables and graphs.

From borderlands to bloodlands

With Russia’s annexation of Crimea and the military conflict in eastern Ukraine, the era of post-Soviet tolerance of blurred identities and multiple loyalties has ended. Borderlands, writes Tatiana Zhurzhenko, have once again turned into bloodlands.

No wonder Aleksandr Dugin, founder of Neo-Eurasianism, has caught the attention of western analysts of Russian foreign policy. Anton Shekhovtsov confirms that Dugin, among other far-right intellectuals, has made headway in his struggle for cultural hegemony in Russia.

An insidious obsession with ratings and the suppression of the opposition: this is all that Vladimir Putin’s rule hinges on now, writes Boris Dubin. However, right up until his recent death, the Russian sociologist continued to combine keen insights into Russia’s rotten political culture with a plea for a new, enlightened historical consciousness.
Boris Dubin died on 20 August 2014. This is the last article he wrote.

Stephen Cohen and the Ukrainian crisis

International instability seems to increase with every passing day of the Ukrainian crisis, ushering in a new era of international relations. Slamming Russian studies scholar Stephen Cohen for misrepresenting the crisis, Nikolay Koposov urges the West to devise a completely new way of dealing with Russia.

The silence of the lambs

Why the West should stop being angelic towards Putin

For Vladimir Putin, the West’s tolerance is weakness and dialogue is failure to impose force. Because KGB-styled Russia believes that either you devour, or you are devoured. Europe’s “silence of the lambs”, writes Volodymyr Yermolenko, is not a proper response to Russia’s war.

The hand that feeds

The first victims of sanctions and counter-sanctions

As Russia becomes more and more isolated, the Russian government will need to provide for all those who support it. Maxim Trudolyubov explains why those who can provide for themselves will be the first victims of western sanctions and Russian countermeasures.

Commander of a fortress under siege

What Putin's strategy means for Russia

Sanctions on Russia may tip economic stagnation into recession and widen the country’s gap with western nations still further. This time Putin seems to be plying an isolationist course without regard for the consequences, writes Maria Lipman.

How to win Cold War II

The West must start to put its long-term interests above the instant gratification of London bankers, German gas traders and real estate dealers all over Europe, who are yearning for Russian money. Then the new Cold War can be won, writes Vladislav Inozemtsev.

Russian society in the light of the Maidan

Poet and essayist Olga Sedakova takes her fellow Russian writers and intellectuals to task for responding with silence to the light emanating from the Maidan: a light of hope, of solidarity and of rehabilitated humanity. A light that Russia would do well to see itself in.

How Russia intends to save the world

As the winter Olympics opened in Sochi amid controversy over Russia’s anti-gay laws, Tatiana Riabova and Oleg Riabov showed how official discourse in Russia brands “European sexual deviancy” a natural result of western democratic development; and Russia as the last bastion of “normalcy”.

Monopoly on violence vs. the right to rebel

A surge of state violence and the subsequent curtailment of citizens’ right to protest, combined with an expansion of the authorities’ right to use force: Kirill Rogov reveals how the “Putin doctrine” previously applied to protests in Russia brought Ukraine to the brink of civil war.

The new realities of the Russian state

Europe should prepare itself for long-term cooperation with the energy-rich kleptocracy that has developed on its eastern borders. Because, given that the personal enrichment of politicians is part of the very foundation of the regime, Russia’s ruling political elite is not about to change any time soon.

That Russia will never be a superpower as the USSR once was leaves it searching for a new international identity. Fyodor Lukyanov argues that Moscow’s policy today is a skilful imitation of striving for global status, intended to conceal the narrowing of the sphere of its immediate interests.

Imperial puzzles for the twenty-first century

The IWM series “Books in perspective” presents publications related to the Institute’s research fields to the local academic community. Authors are invited to discuss their ideas with the audience. On 22 May 2012, Russian literary scholar Alexander Etkind talked about his recent work Internal Colonization. Russia’s Imperial Experience (Polity, 2011). Here, he explains why he wrote this book.

The “Stalinist order” continues to lurk in aesthetic forms and written documents; from an architectural perspective, it lives on as long as the buildings survive. And merges with the new order, in which the new “elite” buy up the same buildings and imitative newbuilds for artificially inflated prices.