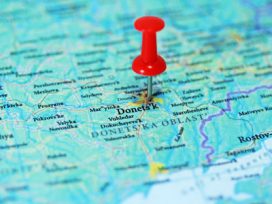 The description of Russia’s anti-Putin protests of 2011–12 as ‘middle class’ was only partially accurate and used to discredit them. The middle class label applies even less to the Belarusian protests of 2020, whose core message is that dignity and respect are not reserved for a privileged minority.

Fault lines of a war foretold

Despite the ceasefire, Nagorny Karabakh’s status remains unclear. Any lasting solution must deal with the anxieties of precarious nations and unachieved statehood. On the historical roots of the long-standing conflict and the legal ambiguities of a war in contested territory.

Bulgaria’s revolt against the past

Sparked by raids on the offices of the Bulgarian president Rumen Radev in July, after mounting dissatisfaction with the Borisov government, the ongoing protests in the country express broad resentment towards a powerful clique whose corrupt methods hark back to the criminal 1990s.

Russian refugees influenced Istanbul’s cultural life from the 1920s despite the Turkification policies of the new republic. The Sevastopol-born sculptor Iraida Barry’s life in exile and love for the city is a piece of this history. However, admiring the Russian diaspora shouldn’t have meant demeaning others – as ended up happening in US press. Ayşe Kadıoğlu revisits a life exiled to Istanbul, while longing for the heartbeat city herself.

The conversion of the Hagia Sophia was intended as a demonstration of strength to Erdoğan’s conservative Muslim constituency and the wider Islamic world. But calculations of political advantage have also caused the weak response of the West. World cultural heritage has been dealt a huge blow, writes a leading Russian Byzantinist.

Russia’s popular vote approving the ‘zeroing’ of Putin’s terms has been hailed by the regime as a triumphant demonstration of trust. Putin’s uncontested status as supreme authority has indeed been reinforced. But will the legitimacy bought by the vote be enough to stem growing uncertainty among elites and declining support among urban constituencies?

Vladimir Putin’s anger and jealousy has taken down many proactive leaders throughout Russia – and left the country vulnerable to crisis. The oil price war against Saudi Arabia backfired, and a recession was already in motion when coronavirus hit the country.

A melancholic fantasy of the post-Soviet subject

On the Cape of Tarkhankut on the western shores of Crimea lies an underwater ‘graveyard’ of statues from the Soviet past. The museum is a metaphor for how cultural memories are formed in a shared unconscious traumatized by loss and unable to adjust to the new order of things, writes Ilya Kalinin.

The self-presentation of the Russian avant-garde

The ‘discovery’ of Medieval icons after a 1913 exhibition marks a shift in the Russian avant-garde’s self-image. From now on, the path of western modernism would be abandoned in favour of a distinctively ‘Russian’ art. But in inventing a tradition for themselves, avant-gardists ‘rediscovered’ a sensibility that didn’t need unearthing.

Free expression on the margins

The Kremlin and the media

On coming to power, Vladimir Putin set about restricting the freedoms that Russian media enjoyed under Yeltsin. After the protests of 2011–12, even the smaller-audience media that still pursued editorial independence came under pressure. Recently, a rise in civic activism and the rapid expansion of internet technologies have brought a new vibrancy – although non-government media remain powerless before the Kremlin’s political monopoly.

Turkey and Russia: A paradox of family resemblance

Both Russia and Turkey are ethnically diverse former empires that underwent similar processes of modernization and had similar relationships with the West. Today, they have revived a civilizational paradigm with a strong authoritarian and anti-western character. Precisely this resemblance is resurrecting rivalry for power and influence in the region.

Many Russians were happy to exchange the freedoms of the 1990s for a stream of oil money and a concept of ‘order’ guaranteed by a paternalistic leader. Putin’s popularity may be wavering, but the demands he caters to are stronger than ever.

American Russophobia in the age of liberal decline

Accusations of Russian interference have become the primary route through which to undermine Donald Trump. In order to sustain public outrage, media and political elites provide a constant flow of leaks, rumours and conspiracy theories. Failing liberal self-confidence is to blame for the return of Cold War rhetoric, argues Andrei P. Tsygankov.

Socialism in one apartment complex

Moscow’s House on the Embankment was home to many of the first generation of Russian revolutionaries. Historian Yuri Slezkine, who has written the definitive account of the building, describes how it embodied the lives, hopes and fate of the Soviet project and its elite.

A 30-hour train journey from Vienna to Moscow offers the chance to connect with the Russian past: contraband, bribery and all. Alexei Korolyov returns to the place of his birth.

The memory of Stalin’s Terror is now receiving more attention in Russia than at any time since the 1980s. However, the scope of the debate needs to be widened still further, argues Daria Khlevnyuk.